How the changes in Amazon’s affiliate program impact businesses 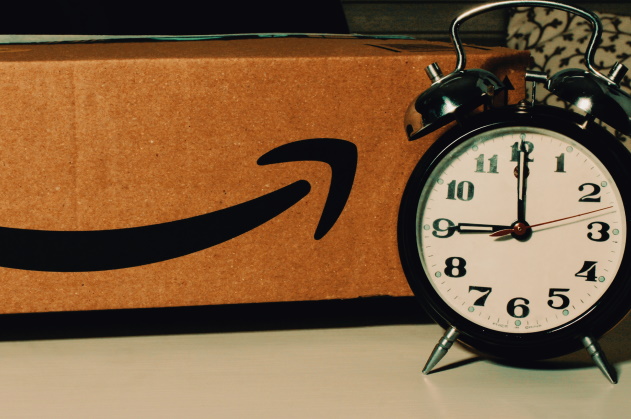 Amazon’s affiliate program was first launched to the general public in 1996, making it among the first programs of its kind. Since then, the program has grown to become an important revenue channel for Amazon and millions of marketers, with affiliates promoting more than 350 million products yearly.

As with all affiliate programs, the Amazon Associates program has gone through many changes through the years. In 2020, the company announced a set of updates that affected a lot of businesses. In this piece, I’ll discuss what these changes are and the best way to adapt.

What Changes Were Made to Amazon’s Affiliate Program?

In April 2020, relevant blogs and publications started buzzing about a planned update from Bezos and Co. at Amazon. According to them, these changes would revolve around the affiliate program and the percentages paid out as commissions to affiliates.

The update, which was eventually announced on April 15 and went live on the 21st of the month, involved reductions to commission rates across different product categories: 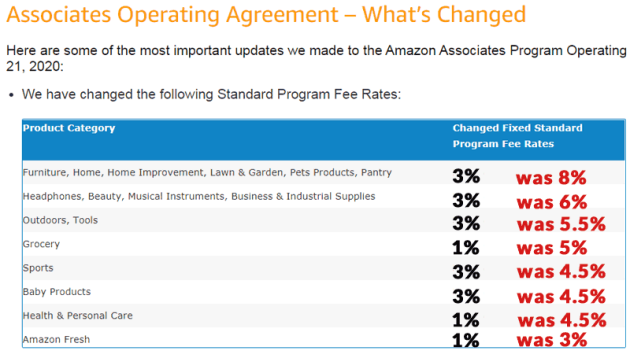 With the update, many popular product categories saw massive cuts in their commission rates.

Furniture commission rates, for example, went from 8% to 3%, while grocery items shrunk from a commission rate of 5% to 1%. Understandably, the changes have resulted in some resistance across the affiliate marketing community. Many businesses denounce what they see as a conscious effort on the part of Amazon to endanger their livelihood.

We’ll discuss how these changes affect businesses in the next section.

How Did it Affect Businesses?

The announcement of the updates came as a shock to affiliate marketing partners everywhere, especially because it happened in the middle of a pandemic. Some bloggers claimed that the Amazon affiliate program is dead, while others saw it as an opportunity to expand their business. Here are some of the biggest effects of Amazon’s update on the business sector:

Without a doubt, Amazon’s commission rate reduction has resulted in a dip in affiliate website profitability. According to one study, earnings losses ranged between 10% to 60%. The same study also concluded that more than 694,000 Amazon affiliates lost close to $800 million after the changes. Or, to put it another way, Amazon’s profitability jumped by $800 million.

The plus side for investors is that reduced profit margins have made sites more affordable. On Empire Flippers alone, there are dozens of Amazon associate sites available for someone with enough patience to work on them: 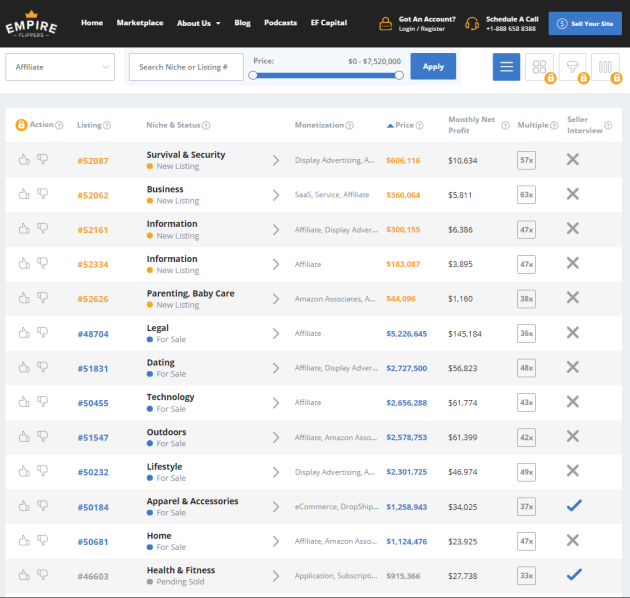 Many of these sites still have high traffic and revenue figures. They no longer generate as much profit as they used to, primarily because of the changes.

The change is a golden opportunity for aspiring business owners.

Less diversified affiliates were most impacted.

Predictably, websites that got the bulk of their revenue through Amazon affiliate links were among the hardest hit by the April 2020 update. In contrast, many super affiliates with a diversified income stream were better positioned to deal with the change.

The overnight impact of a company's policies highlights the importance of diversifying your sales and marketing channels. For example, any change in the Google algorithm can hit sites completely reliant on organic search traffic.

Websites were forced to branch out to other affiliate networks.

With the income from Amazon affiliate marketing dropping overnight, site owners are looking at other affiliate programs that offer more competitive rates. The Target affiliate program, for example, is an attractive option for people who are looking for a volume-based commission structure. Once eyed as one of Amazon’s high-profile acquisitions, Target sells only brand-name products.

However, every affiliate marketing program has its quirks. For example, with Target, certain high-volume product categories, such as sporting goods, grocery, and household essentials, don’t qualify for commission.

Niche-specific websites are also turning to industry-specific affiliate programs. These include BHPhotoVideo, which offers up to 8% commission on electronics; NewEgg, which specializes in computer parts and accessories; and Rakuten, which powers Walmart’s and Best Buy’s own affiliate programs.

Banner ads have been around for a long time. Two years before affiliate marketing, to be precise. The first ad, for AT&T, was just a small rectangular logo. Since then, they haven’t changed a lot. They often feature products, branding, and a compelling call to action. Display advertising is so powerful that its share of global ad spending trails only that of TV advertising.

While there are hundreds of display advertising programs in the market today, Google AdSense is still at the top of the heap. It is probably the easiest way to break into website monetization - you just need to add some code to your site and let AdSense do its magic. Advertisers will then use smart bidding to target your site visitors and display their ads on your site.

Unfortunately, display advertising is never going to offer the earning potential of affiliate marketing. After all, if an advertiser is paying for an ad on your site and making a profit, you’re missing a trick.

Amazon’s 2020 update has left website owners and affiliate associates everywhere bewildered by what they perceive as a money-grab, especially after affiliate site valuations went down. However, the update is also an excellent opportunity for businesses to diversify their revenue streams.

For instance, many websites were forced to promote product lines that weren’t in their original scope. Some also chose to sign up with other affiliate programs to ensure a more even distribution of revenue sources. Display advertising has also gone through a resurgence while web owners search for ways to boost flagging revenue.

Time will tell if the changes will be rolled back once the economic climate recovers, or if Amazon will stick to its new commission model. While the initial reaction to the Amazon 2020 update has been negative, it is also a wake-up call for site owners to either diversify or pivot from Amazon altogether.

Domingo Karsten has over 10 years’ experience in online marketing. He is involved with We Can Track. His writing has been featured in FastCompany and others, follow him on Twitter at @domingokarsten.