How shrouds cause chimney fires

Chimney fires are one of the most dangerous events that a house will typically endure. If the house is still standing when the smoke clears, the investigation that follows is usually worthy of a Sherlock Holmes adventure.

Many factors come into play on most chimney fires, and it is the responsibility of the chimney professional to play lead detective and ferret out any and all factors, create a hypothesis and prove his theory to the satisfaction of the fire department, the homeowner and possibly an insurance company. This requires good, clean info. That is what I wish to share here.

With a full masonry fireplace and chimney, the search for clues always begins in the hearth area of the home: what sort of fuel or accelerants was used. It proceeds to the chimney flue pipe — was it tarred up or broken? — and eventually leads to the top of the chimney and a search for a bird’s nest or other factor to explain the buildup and ignition cause of the fire.

That is all well and good for a traditional masonry fireplace, but there is another type of chimney fire which has been shrouded in mystery. These chimney fires have occurred in all 50 states, yet are nearly universally misunderstood by all, so they keep on occurring. This condition surrounds all of us.

The case of pre-fab fireplaces with chimney shrouds: The ways shrouds cause fires.

This article will explain the different ways that a chimney shroud can cause the inside of a wood chimney to catch fire from top to bottom, then ignite the attic of a home, usually in the middle of the night, after a warm friendly fire has been enjoyed. These fires cause burning debris to drop from the ceiling while residents are asleep and are accompanied by a sound like a jet plane landing on the roof. Terrifying is an understatement.

Chimney shrouds are decorative metal housings, set on top of the framed chimney that aesthetically improve the looks and sales appeal of a house by hiding the term cap and giving the top of the chimney a finished look. Architects draw them, builders and homeowners love them, and pre-fab fireplace stores have made and installed the majority of them.

It is estimated that the number of houses with pre-fab fireplaces and locally made metal chimney shrouds is in excess of 10 million. Rob Struble, former technical director for Heatilator Fireplaces said, talking about the typical shroud on a minimum-sized chimney, "If the homeowner burns wood, it is not a question of if, but rather just a question of when, that house will catch fire."

This experience was gleaned from the Moorpark, California, fires of 1989, 30 chimney shroud fires in 15 days over Christmas, which led to the Wood Heating Alliance (now the HPBA) letter of 1990, condemning shroud use. A letter which was — oddly — not widely disseminated by the fireplace industry.

Shockingly, when pre-fabs were invented in 1956, they were not tested for use with a decorative shroud. An exposed chimney pipe and term cap, soon to be rusty, was considered good enough. Obviously none of the engineers was a woman... When testing was finally done after the Moorpark fires, it was found that shrouded chimneys needed a 40% larger chase top than the standard minimum framing size to be safe. Huh!

The short story is chimney shrouds, topping framed chimneys and hiding the unsightly termination cap, were never a listed “legal” part to begin with, and should not be there. As a non-listed part in a listed assembly, the shroud simply was not allowed. There is no grandfathering a non-listed part, and reinforcing this point is the International Fire Code — 603.6.3 — which mandates the removal of every chimney shroud in the U.S. that surrounds a pre-fab fireplace and is not bearing a UL (or other listing agency) listing and a visible UL label. This creates quite an opportunity for chimney sweeps across the U.S. to do good deeds and share in the remediation efforts to fix this problem, the cost of which is easily in the billions.

How does a metal shroud, surrounding a metal pipe and sitting on a metal flashing, start a fire?

The shroud will cause a series of events that lead to a fire. It starts with the shroud temporarily trapping the 600-degree flues gases inside it until they can vent out. Inside the shroud is also the entrance for the chimneys cooling air, which as the inner pipe heats up, causes a thermosiphon of air to be pulled down one side of the outer air chamber, switch sides at the bottom and be pulled up and out the other side.

When the inner pipe heats up, the thermosiphon of air takes place whether the air is 80 degrees — what UL used — or 600 degrees. This smoky air not only overheats the pipe, it leaks into the framed chase cavity at every pipe connection. The chimney fills with smoke and pyrolysis — a chemical change in wood induced by heat — begins with the wood drying, blackening, charring and more or less turning into charcoal.

Charcoal ignites at a lower temperature than wood and burns at a hotter temperature. This pre-fire condition can lead to a chimney fire in the first use of the fireplace, or creep along for years. But eventually the smoldering charred wood will find some fresh air, usually the attic or a weak spot in chimney chase, and the entire chimney from top to bottom is on fire. Eventually the entire house and often the neighbor’s house will be on fire.

Shrouds also cause fires and hurt people by:

1. Overheating the chimney pipe and leading to a failure of the overall fireplace parts,
2. Overheating the pipe and causing a spectacular 2,300 degree chimney fire inside the flue if tar is present,
3. Cause fires at the top of the chimney by trapping and radiating heat into the chase top framing.
4. Cross-ventilation from one flue into another, which can cause a connected neighbor’s house in a multifamily building to catch fire even if they have never had a fire in their fireplace.
5. Carbon monoxide can also be crossdrafted from a gas flue into an open woodburning flue, inside the shroud, which acts like a wind tunnel. This can cause illness, brain damage and even death.

How to inspect a chimney fire in a framed chase with a pre-fab woodburning fireplace and an ‘open top pyramid’ shroud.

Shrouds also come in mailbox styles and house styles with windows and roofs. The latter two styles also cause fires, but are only 10% of the shrouds out there, so we will focus on “open top shrouds.”

The typical chimney shroud is tapered with an open top and it sits on a metal chase pan that — if a woodburner — probably required an air gap between pan and chase top framing.

1. ID the fireplace via the metal listing tag inside fireplace box near top. Brand and model no. for fireplace, chimney flue spec.
2. Check to see the proper flue was used. The chimney flue instructions are where the chase pan spacing and ventilation requirements can be found.
3. Measure the chase pan and note if it had spacers holding it above framing; most require this.
4. Inspect and measure the shrouds: Does the shroud have a metal UL tag? What is the height, the top opening size, the base opening size, the height and width of leg gaps on the shroud.
5. Look inside the chimney; is there charred framing from top to bottom with extra hot spots near each chimney section meeting? (This is a sure sign.)
6. At this point, if these clues are present, you have enough info to conclude the shroud probably caused the chimney fire. 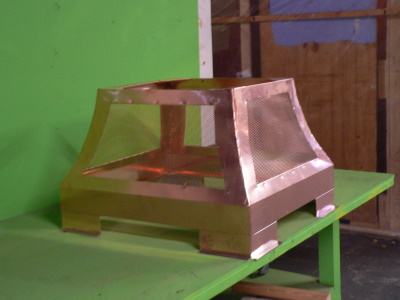 What if the shroud was required by the homeowners association, or the customer is very attached to the look?

There are options...But they start after the shroud and pan are removed.

1. After removing the non-listed shroud and inspecting the inside of the chimney chase, & probably replacing the chase pan, it is possible to make a shroud out of 1/2" screen in the shape of previous shroud.
2. After remediation work is done, an enhanced chase pan can be added that makes chase

People tend to be very attached to their shrouds. Men like fire in the hearth area. But women tend to like the exterior of the house to be beautiful. Now both can be happy and safe.

Can shrouds ever improve the function of the overall fireplace? 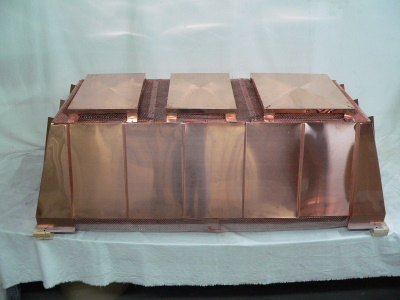 Since 1996 NFPA 211 and NFPA 51, along with the International Mechanical, Plumbing and Fuel and Gas Codes since 2000, require shrouds used with pre-fabs to be listed and labeled for use with the chimney pipe. There are 10 million-plus custom metal chimney shrouds out there that do not meet this requirement.

The International Fire Code 603.6.3 mandates the removal of all non-listed/labeled shrouds. End of discussion.

The 1990 Wood Heating Alliance letter signed by every major fireplace manufacturer states the use of an unlisted shroud voids the fireplace listing and warranty.

When the pre-fab fireplace industry realized the scope and seriousness of the chimney shroud problem in 1990, they quietly wrote a disclaimer letter thru the WHA. Then, every single fireplace monolith sold their companies, took their money off the table, and left others to sort out and unravel the problem. So, it appears the chimney sweep industry is going to be the white knight that exposes this problem, warns the unsuspecting, and solves the problem.

Who wants to be a hero?

Derek Lidstrom started out as a mason’s helper, became a custom home builder, and started Chimney King in 1993. In 1996 Chimney King made the first listed and labeled custom chimney shroud (HHT chimney) and in 1998 as a member of BOCA Derek proposed the Int Fire Code calling for the removal of all non-listed shrouds. Currently Derek resides in Gurnee, Illinois, with his wonderful wife Edith, their dog and two cats, and Rayza.