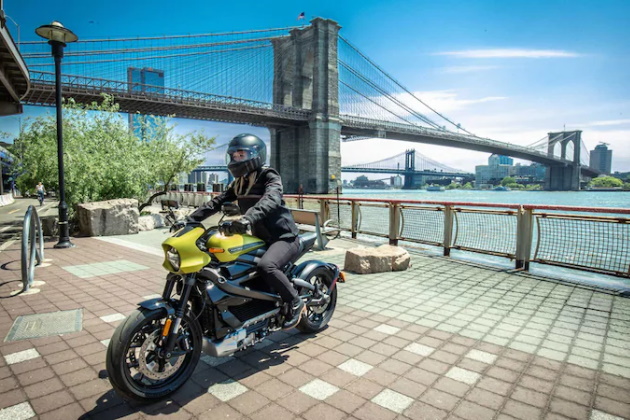 In the world of motorcycling, it’s no secret that Harley-Davidson — America’s oldest and most iconic bike-maker — has been struggling in recent years. Sagging sales have forced the Milwaukee-based manufacturer to pursue a new strategy. It’s an approach known internally as The Rewire, recently implemented by the brand’s new German-born CEO Jochen Zeitz. It paves the way for some significant changes at H-D.

The antiquarian thunder of Harley’s powerful-but-dated V-twin OHV engines is being slowly but seriously partnered with the subtle whine of electric power as the company introduces its first e-bikes.

The big news from Milwaukee — sure to inspire the company’s 1,400 dealers in nearly 100 countries around the world — was the July introduction of the LiveWire, a high-tech, low-slung electric motor-powered rocket that can scream from zero to 60 in 3 seconds and commands a price of nearly $30,000.

Critics immediately pronounced the machine overpriced at its list price of $29,795. But here’s what Wall Street Journal

motoring columnist Dan Neil had to say about that:

“Since the LiveWire is by my estimate the best sport-riding experience in the world,” wrote Neil, “and since it represents the renaissance of a great American brand, here and abroad, and since the LiveWire is the most hellacious power tool ever to come out of Milwaukee — a pleasure saw, a recreational ride-on belt sander, a high-torque scenery shredder — I think the price is fair.”

The bike comes with a 15.5 kWh battery pack that can be recharged by a DC fast charge to 80% capacity in 40 minutes or to full capacity in an hour. Charging from a standard household outlet is an overnight process. Stated range is 145 miles in the city, with a combined city/highway range of 95-100 miles.

The modern technology that produces the machine’s startling performance is sure to attract younger and more aggressive riders (“canyon racers” in the vernacular) and there are plenty of high-tech features on display, given a closer look.

The LiveWire comes with four pre-programmed modes: sport, road, range and rain, along with three ride modes the rider can customize. Its forged aluminum frame provides high torsional strength with minimum weight. Suspension components are sourced from Showa and have a range of settings that allow the rider to dial in just the right amount of performance or comfort desired.

Using the Harley app, owners can monitor the status of their machines from afar and get an alert if anyone disturbs them when parked. A state-of-the-art digital display incorporates needed information as well as navigation assistance.

Also new to the Harley-Davidson lineup, and destined to be released in March 2021, is the Serial 1 — an electric bicycle inspired by the marque’s “Serial Number One” motorbike from 1903 — the company’s oldest known motorcycle.

The bike’s design, with its fat white tires, leather saddle and handgrips and sleek black frame, is intended to harken back to the original Serial 1. It’s a nostalgia play but also a serious effort to share in the booming e-bike market that experts say will top 130 million e-bikes sold globally between 2020 and 2023.

The Serial 1 has a mid-drive motor, a belt drive system, a frame-integrated battery, frame integrated headlight and taillights and internal brake lines and wiring.

Harley hasn’t offered up any specs as yet, so we can only guess about power levels, range and price — but the company says the price will be competitive with similar machines in the “few thousand-dollar range.” Harley also intends to spin off its e-bike division as a separate company called Serial 1 Cycle.