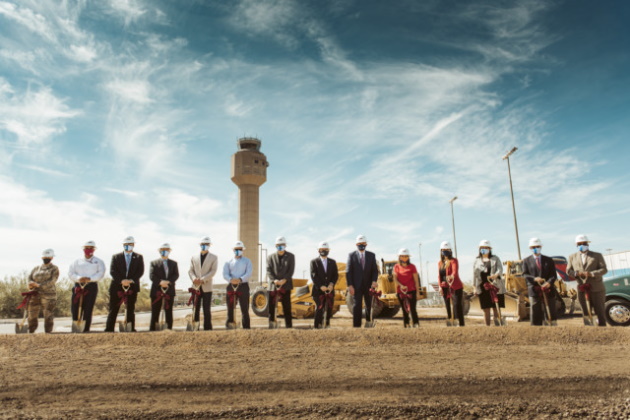 Tucson International Airport is about to enter a new phase as it begins development of a major infrastructure upgrade that will improve facilities for operators, bringing the airfield in line with the latest FAA safety standards.

Ground was broken on the new project — the largest in the airport’s 72-year history — on October 15 by representatives from across Southern Arizona and the Tucson Airport Authority (TAA).

The present airport layout dates from the 1960s and is in need of modernization. The new works will center around a new runway parallel to the current main strip.

At present, a smaller parallel runway is used for general aviation aircraft. This will be removed and replaced by the full-length runway capable of handling larger aircraft. It will be constructed at a safe distance from the existing runway, with a center taxiway running between the two which keeps aircraft separate from those using the runways.

Modernizing the airfield in this way brings Tucson in line with current FAA safety standards. It also follows a thorough environmental study.

Other works include additional taxiways, land purchases, demolition of existing infrastructure and funds to soundproof the homes of local residents.

Tucson International is in an interesting situation. It shares its runways with an Air National Guard (ANG) base located on the northern part of the airfield. To accommodate this use, work will also be undertaken to demolish old structures and add new barrier arrestor cables and additional parking areas for ANG aircraft.

In August the airport found itself assessing the situation whereby it was part-way through a significant strategic plan when COVID-19 hit.

“We had to pivot,” said Danette Bewley, president and CEO of the TAA. “We took stock of the situation, identified the critical steps needed to stabilize the organization and protect the operation, and set out on a path to recovery. Tucson International Airport may be the only airport in the country that has a Strategic Plan developed to respond to impacts presented by COVID-19.”

It is a difficult time to make much fanfare of such an important milestone, with the number of attendees at the groundbreaking ceremony limited, and those who did attend observing social distancing.

Nevertheless, Bewley made a speech at the event, commenting: “When there is a group of 40-50 stakeholders, who can collaborate and reach a mutually beneficial outcome for the airport and the community, you know you have a successful project.”

Committing to such developments in these times may seem a risk for Tucson as passenger numbers drop. But this is the culmination of years of planning by local stakeholders who recognize the huge impact the airport has on the local economy and how it acts as a catalyst for growth.

Tucson recently announced that it has become only the fifth airport in the world to be recognized under the GBAC STAR™ Facility Accreditation Program that is the cleaning industry’s only outbreak prevention, response, and recovery accreditation for facilities. This followed an investment of more than $250,000 on upgrades in and around the terminal to ensure a safe and healthy experience.

Earlier this month Southwest Airlines announced the launch of a new route to Houston Hobby from November. It brings the number of nonstop destinations from Tucson’s to 13, including: Atlanta, Chicago Midway, Chicago O’Hare, Dallas/Fort Worth, Denver, Houston Hobby, Houston Intercontinental, Las Vegas, Los Angeles, Phoenix, Portland, San Francisco and Seattle. Flights to Minneapolis-St. Paul are scheduled to resume in December and flights to Indianapolis, Provo, San Diego and San Jose are tentatively planned to resume in 2021.

Tucson’s new runway is expected to be opened in 2023, with the remainder of works on the $300 million project completed in 2024.