First, do no harm: When healthcare practitioners work while sick 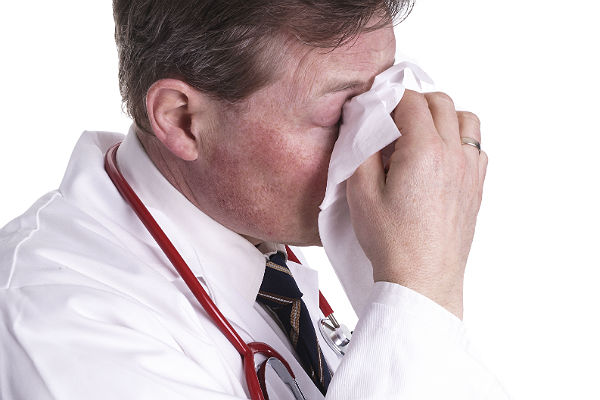 "Go to school. You'll be fine," or "If I miss work, I'll be fired." These are common misconceptions most of us have learned throughout life. Why is it so difficult for us to stay home when ill?

The reasons are different for each of us. For the general public, one reason is more than 40 million American workers get no paid sick leave. They have to work when ill or take unpaid sick days, which can lead to financial hardship, or even dismissal.

But what about healthcare professionals? When clinicians work with symptoms of infection, they can put patients and colleagues at risk.

Many physicians and advanced practice clinicians have reported to work while being sick despite recognizing this could put patients at risk, according to a small survey published online by JAMA Pediatrics. Even though nearly every medical practitioner in a recent survey acknowledged the potential risk for patients, more than three-quarters of all respondents said they have worked while they were sick.

The physicians cited concerns ranging from continuity of care and letting patients down to staffing concerns and fears of professional ostracism.

And why do they work when sick?

The study was limited in several ways because it was anonymous, so researchers couldn't assess bias or which job title a responder might have, in order to compare groups. Those who answered the survey (only a little more than half who were asked to participate) might have different opinions than the nonresponders.

Additionally, the survey was conducted at only one hospital, and the patients were children, which may affect the doctors' perceptions of their roles.

That said, previous surveys have found similar results among different doctors and other locations, showing internal pressures in the medical community to work despite illness.