Even downtown remodeling projects are bigger in Texas

Downtown remodeling is a hot topic as an increasing number of local governments and municipalities are focusing on changing the face of their downtown areas and converting them into modern areas of work and leisure. The focus of these remodeling projects is to bring back the old, original glory of the downtown that has been the hallmark of American progress and development for over a century.

The process is as much about urban beautification as it is about influencing the mindsets of people toward resurgence and improvement. The trend started with removing the derelict and wasted-away look of downtown areas and has now become the major endeavor for local governments across the country to change the way their city is thought of and perceived.

The remodeling projects for Dallas and San Antonio promise to take the Texan downtown brigade ahead of their counterparts across the nation. The focus of these new projects is to further enhance the physical environment around the downtown area and improve its public appearance in layers. To this effect, some unique projects have been lined up that promise to completely change the downtown experience. These highly visible projects are spearheaded by teams featuring the best brains that have as much talent for urban remodeling as they have the deep passion for it. 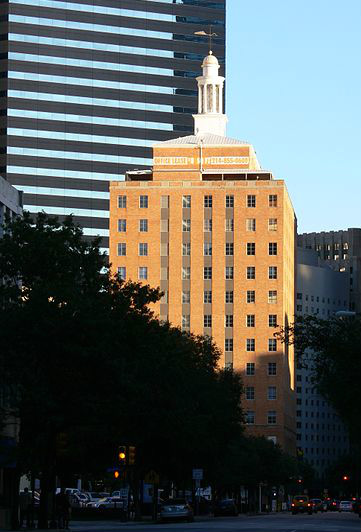 One of the most talked about projects in Dallas is the refurbishing of the historic Hartford Building. The building opened in 1959 and was the first high-rise to shape the modern Dallas skyline. This 14-story brick building (at right) is set to be remodeled into loft-style modern office spaces for the new generation of business. The 175,000-square-foot tower will be repositioned to blend in with all the latest changes in downtown Dallas, while at the same time remaining a signature property for preserving heritage.

The 30-story Patriot Tower is undergoing a $100 million remodel, and it is slated to be a major contribution to the continued growth and redevelopment of downtown Dallas. The exciting remodeling plan for the tower will not only include modern offices, but also state-of-the-art conversion of the upper 17 floors into apartments that will deliver a unique, luxurious and stylish experience of modern downtown living. Proponents for the plan have claimed that this adaptation and remodeling of a landmark Dallas building will be a catalyst for large and aggressive redevelopment projects throughout the Southwest.

Though not as old as the other buildings, the 45-story Lincoln Plaza has been a familiar landmark in Dallas. The familiar Dallas skyscraper will now be known as the Ross Tower, which will tie the building with the Ross Avenue, the new Klyde Warren Park and most importantly with the Dallas Arts District. Plans are afoot for a gigantic and bright sculpture that will start outside and extend right through the building's lobby. This will not just grab attention but also be the one point that will link the tower with the Arts District across the street. Millions are slated to be spent to refurbish the building and make it more attractive.

Taking this revival trend forward is yet another Texas town, San Antonio. The city is the epitome of a wonderful cultural blend that is Spanish, American and Texan, and it sees a huge influx tourists throughout the year. Tourism and the emerging business and technology industries that have taken root have greatly added to the economic development of the region. Despite such advances, however, downtown San Antonio has seen its share of deterioration and has been in dire need of revival for many years now.

The downtown remodeling here is not just about beautification. It has been a rigorous exercise to bring back local businesses so that more residents are attracted to both work and live in downtown San Antonio. Conversion of older offices to apartment buildings is also slated to bring in more retailers, which would help reinvigorate the downtown verve and feel of yore.

In recent years, more and more businesses have moved to the suburbs because of the cost, but proponents of downtown revival feel that once the revival plans are in full swing and business owners see the change, they will move back. It is difficult to get the downtown atmosphere elsewhere, and commercial enterprises that want to retain their true business character would prefer a downtown location and a lively, urban environment any day.