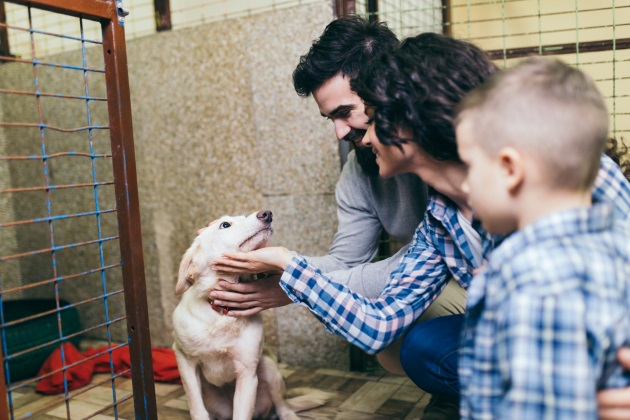 It’s difficult to analyze any perceived problem behavior without recognizing the role the animal’s territory plays in it. This difficulty occurs because establishing and protecting the territory is a top animal priority.

Moreover, this includes the mental and emotional as well as the physical space. If animals don’t know where they fit in relative to any people or other animals in their space, their territory is no more secure than a space with physical hazards they must learn to negotiate safely or avoid completely.

When people think about their pet’s territory, though, they often think about it in general terms — e.g., only in the here and now, and strictly as it relates to their home and yard. This may suffice if their animals are from established local sources. In that case, those people and area practitioners already may be familiar with the breeders, previous owners, or animal control officers who picked up the lost or stray animals and took them to a local shelter.

However, for veterinarians practicing in areas that attract a large population of transported dogs and cats (perhaps to a lesser degree), reliable territorial histories may be hard to come by. Ask Ms. Doe where her animal lived before she got him, and all she knows is that he came from a rescue organization "down south somewhere."

Aside from (maybe) providing a broad geographical location, she can offer little regarding the animal’s life prior to when she adopted him. If she adopted her transport animal from a local shelter to which the dog was shipped, any history she received about him may focus almost exclusively on what happened to him after he took up residence there. If she picked him up at a drop point in a parking lot, her new dog’s history may be limited to what the person driving the transport vehicle can provide.

It goes without saying that key differences may occur in the process triggered when animals with limited histories are presented for medical vs. behavioral problems. When animals with limited histories are presented with medical problems of unknown origin, the possibility that the animals may carry a disease that could pose a threat to others may be a primary concern of veterinarians and the animals’ adopters. Although public health concerns may head the list, concerns about any threat the new addition’s illness may pose to other animals in the household and the community also exist.

In the medical problem scenario, practitioners with only general geographic information regarding the transport animal’s origins can contact multiple sources regarding diseases and parasites common in those areas, their routes of transmission, public health significance, symptoms, diagnostic tests, treatment, prognosis, and prevention.

However, when it comes to behavioral histories, a more casual view may prevail every step of the transport animal’s journey from birth to the adopter’s home. Sometimes practitioners and members of the public get so used to hearing and accepting sad stories in place of concrete facts that they even may consider "he came from a rescue" or "she came from a shelter" a valid history when, in fact, it tells them nothing.

The rescue puppy or kitten could have been born under an abandoned porch, in a rescue facility filled with other animals of the same or different species, or in a foster home with or without children or other animals. The adult animal could have been transported from a different state or even country, and spent weeks or even months being bounced through multiple foster locations where the animal was exposed to multiple people and events, some better than others.

Instead of a detailed history that includes the animal’s behavioral and bond responses during this period, only some sad story may accompany these animals as they move through the system. Sometimes these stories replace histories that don’t exist because any records kept by those involved in the process were nonexistent or incomplete. Other times, these stories attempt to present known or suspected behavioral problems in a manner that downplays their seriousness or how long they may take to resolve.

With behavioral problems, nothing exists comparable to the veterinary medical resources available regarding the diseases common in a geographical area and how to diagnose, treat, and prevent them. Lacking such resources, it can take a great deal of time and energy to determine the kind of basic information most practitioners take for granted when addressing medical problems.

Meanwhile, the clock is ticking. No matter how strong the bond some people who adopt these animals may have with the image elicited by the sad story, many lack the strong bond with and commitment to an animal that comes with a comprehensive, reliable history. It’s that concrete knowledge that enables them to trust their animals and go the extra mile for them.

Barring that history, practitioners can only do their best. Often, it’s possible to use an understanding of what the animal is doing now as an indicator of past experiences. The key here is the ability to ignore the considerable emotional charge these animals often carry and analyze their behaviors objectively.

Instead of thinking about these as problems, think about those circumstances where those behaviors would have been adaptive instead of maladaptive. For example, a more aloof dog from free-roaming, warm climate roots who chews the window and door frames in an effort to get out of her new home may do so simply because she hates being confined. Period.

She never experienced confinement in her native environment and her experiences with it since her capture did nothing to convince her this was a quality way to live. Although hardly a complete history, at least it provides a starting point.

In the long run though, it’s better to take more preventive approach. Remind local shelters or rescues that offer these animals to the public that they have — or should have — a strong incentive to find out where these animals came from originally and how many different environments they passed through before their organizations put them up for adoption. Educate clients seeking to add an animal to their households about the role a reliable behavioral history plays in their future animal’s and their own success.

Many companion animal adopters consider animals from nonlocal sources potential members of their families: They want to adopt a pet, not a project. The only way to help ensure this means that those involved from the beginning to the end of the process demand that a quality medical and behavioral history accompany the animal.