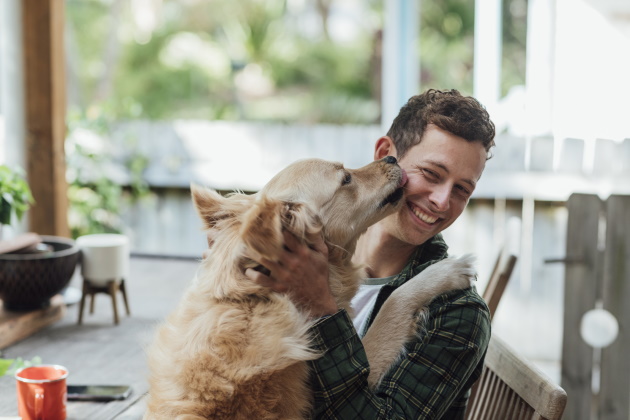 Human-companion animal behavioral rituals follow a similar pattern every time the animal displays them voluntarily or in response to some cue from the owner. The human-animal sequences that carry potent positive emotional charges may play a significant role in human and animal well-being — for better or worse.

For example, all practitioners are aware of the positive physical and behavioral benefits of exercise routines — such as long walks or play sessions — that owners engage in daily. However, other times people unwittingly may create behavioral rituals that may complicate their and their animals’ lives months or even years later.

Typically this occurs because the circumstances that supported rituals cease to exist for some reason. This has always been the case, but in these uncertain times, such changes appear to be more common. When this occurs, these once treasured rituals may become problematic for those people or others who must deal with any negative consequences of them. And some of these folks may turn to their veterinarians for help.

Granted, some clients may feel reluctant to seek veterinary help. They may feel too embarrassed to share the intimate, or sometimes silly details of their human-canine or -feline interactions. Others may feel reluctant to admit that the ritual has become problematic if members of the veterinary staff previously praised these as evidence of the great love these clients and their animals shared. Still others may question the veterinarian’s or a staff member’s ability to help them and their animals in these situations.

Let’s consider some examples of familiar human-companion animal rituals that may backfire.

A common one is the boisterous canine greeting that that occurs when people and others enter the animals’ homes. Many people initially may associate the behavior with a loving canine welcome and respond in an equally exuberant manner. But when the cuddly puppy becomes a 60-pound adult dog who routinely mows people down, these dogs may get a sudden makeover. Yesterday’s most lovable dogs may find themselves suddenly demoted to the world’s worst canine menace.

Add the number of people who feel less than physically or emotionally fit as they deal with COVID-19 and other stressors, and that once-presumed loving canine behavior may take on an even more intense negative charge. Some people even may punish their dogs for displaying the same behaviors they once happily encouraged. Obviously, such contradictory responses confuse the animal and may lead to other problem behaviors. Even if they don’t, the quality of the human-animal bond will suffer.

Additionally and somewhat surprisingly, some people who consider it loving when their own dogs jump on them don’t like it when other peoples’ dogs do. Human uncertainty element often fuels these responses.

People know that their own dogs will exuberantly greet them when they come into their homes and what this communicates. But they have no way of knowing if dogs belonging to others will greet them the same way or if it will mean the same thing when the dog does. This may cause those people to give mixed cues to the dog whose own responses then may become unpredictable.

High-energy leaping greetings also may represent one form of the tend/befriend fear response used by stressed dogs who can’t freeze, run, or flee for some reason. If so, then encouraging the behavior reinforces instead of lessens the animal’s distress.

Feeding ceremonies comprise another group of human-companion animal rituals that may become problematic when the circumstances supporting the displays change. Some of these involve elaborate meal preparations while others consist of complex feeding rituals in which the owner plays a key role. Experienced practitioners may encounter these when dietary changes or feeding rituals must be changed to ensure the animal’s health.

These rituals take time to establish. And sometimes, lots of time. As a result, these complex food-based interactions may take up a big part of these folks’ and their animals’ lives. In the saddest cases, the doting owner dies or becomes incapacitated and unable to care for the animal. While offspring may like their mom’s old dog, none can prepare the dog’s elaborate homemade diet, let alone feed it to him from his special bowl using his special spoon like their mom did. Not that it matters. The old dog wouldn’t accept the food from them even if they did.

Those so burdened by the repercussions of these deeply entrenched ritualistic animal behaviors also may lack the time, energy, or desire to change them. If these animals refuse to accept a new diet or feeding ritual within a relatively short time, rehoming may become a viable option. If no one wants to assume this responsibility and as much as it saddens any already grieving survivors, they may request euthanasia for the animal.

In more benign but equally owner- and animal-distressing cases, changes in the person’s lifestyle may no longer permit the fulfillment of the feeding ritual for some reason. The person who previously worked from home takes a new job that requires travel. COVID-19 side-effects makes it impossible for the owner to perpetuate the ritual.

In all of these cases, what began as a human-companion animal ritual perceived as all-positive, suddenly becomes an albatross hanging around the owner’s neck. Even when changing these behaviors is an option, these represent the ultimate behavioral-and bond challenge. Not only must these people extinguish behaviors they perceived as evidence of great human-animal love. They must replace these with new behaviors they often previously defined as lesser and even unloving in some cases.

Who needs that? Probably not the majority of companion animal folks and their animals, let alone the practitioners these clients may turn to for help…

Think about any private rituals your clients or others may share with their animals. Would someone else be able to step in easily and fulfill these obligations if necessary? Would those people want someone else to? If having such a back-up is acceptable, then finding such a person to assume this responsibility for the owner solves the problem. But this can be a time-consuming process that takes a lot of commitment to the animal. Sometimes both may be in short supply during times when many people may have more pressing issues on their minds.

Prevention once again takes less time and causes the least heartache in the long run. So before supporting some elaborate human-animal ritual that could make your clients and their animals feel really special, ask yourself a simple question: “Who can or will fulfill this ritual if the owner can’t for some reason?”

Using human-animal behavioral rituals to celebrate uniqueness makes people feel special. But we and they need to care enough about their animals that any desire to feel special doesn’t make it impossible for others to fulfill the animal’s physical and emotional needs should these owners be unable to do that for some reason.