EMR systems generating a new set of problems for nurses 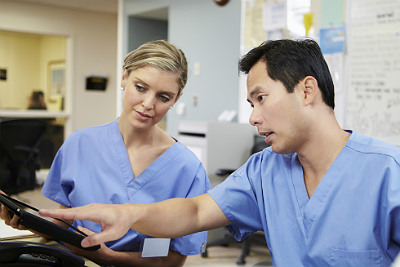 One of the biggest proposed purposes and benefits of the electronic medical record (EMR) was improved patient care and safety.

Gone would be the days of "team reading" of illegible doctor's orders — now prescriber orders would be entered directly into the record, removing errors from handwriting and transcription. Gone would be the days of reading data to providers over the phone — now they would have remote, instant access to patients' records. In fact, the patient would now have instant access also, sometimes even before the healthcare provider has had a change to review the EMR.

The future was looking bright, safer and more efficient.

The current healthcare arena is now surrounded by technology that measures patient information. Automation has arrived, but can it talk to the EMR system and facilitate true integration for the safety of our patients? Or is it just another layer of problems not yet realized?

Imagine a hospital of true integration of technology.

For example, picture a narcotic infusion that stops when the oxygen saturation levels or respiratory rate drops. Or even if the ventilator could deliver more oxygen in response to a trend of lower oxygen saturations. Each of these tasks could be automated if devices actually communicated with each other, easing the workload burden of first-line providers, specifically the RN at the bedside.

To better understand the day-to-day impact of the lack of communication among multiple devices, the Gary and Mary West Health Institute recently commissioned a survey of the nation's nurses. They found that 3 of 5 nurses surveyed said medical errors could be significantly reduced if devices were connected to share data.

A common error often cited is with transcription — which was supposed to be virtually eradicated with automation and the EMR. When a value or data is entered into the wrong column or data spot, the potential for error in treatment becomes inevitable.

One of the main drives for the EMR was to prevent this common, well-known problem in healthcare from occurring. Instead, extra steps have been created, usually forced upon the nursing staff to complete the same tasks.

For example, if the vital sign machine does not communicate with the EMR, then the nursing staff has to manually enter it into the EMR. This task was previously as simple as writing it down. Now it is comprised of multiple steps — log in to the EMR, find the right patient, open the data entry area for vital signs, and then transcribe the numbers from the machine into the EMR. A previously-simple task has been converted to a multiple-step process, which essentially equals time away from patient care.

A HIMSS Analytics survey in 2010 found that 90 percent of hospitals have six or more devices that need integration with the EMR. However, only one-third actually do integrate them with the EMR.

Considering that virtually all nursing staff interact with some type of technology each shift, the impact on the workflow is significant. The average floor nurse has 5-6 patients, multiplied by one or more medical devices per patient (usually up to 10 devices in the ICU).

The nurses' workflow when there is lack of interoperability becomes almost burdensome. This breeds an environment that becomes "machine" and data-focused, instead of patient-focused as intended. Most of these devices were created to aid the nurse at the bedside. However, this has not been the case.

Sadly, most nurses were not included in decisions that directly impacted their workflow and ultimately patent care. A survey of 14,000 nurses found that 98 percent were never included in the decision or design.

The meaningful use financial incentives caused many institutions to hastily implement sub-par systems without taking into consideration the impact on the direct care providers. In fact, 97 percent of for-profit and 84 percent of not-for-profit hospital nursing administrators confirmed that nurses' workflow was not considered in final EMR decision.

Unfortunately, when a system is implemented without the input from its end-uses, there will be workarounds. Nurses are experts at workarounds. They will do what it takes to get the job done for their patients.

Nurses will typically make the best decision with the circumstances they are faced. They ethically see no other choice. Currently, nurses are wasting precious patient-care time entering data that should be automated. They are wasting hours with redundant documentation, placing patients at risk.

Although the original goal of EMRs may have been to improve patient care and safety, it needs to be well thought out. The challenge is great when introducing new technology, however, the end-users need to be a part of the conversation to determine if the process with actually work.

As many institutions are settling into the their EMR systems, the problems will begin to present themselves. However, it appears that the problems have been there, and nurses have just been trying to work around them and take care of their patients.

The healthcare community needs to be vigilant in the impact of new workflow patterns and how they impact patient care. Although we may have eradicated some old problems, we may have exchanged them for a new set of problems.