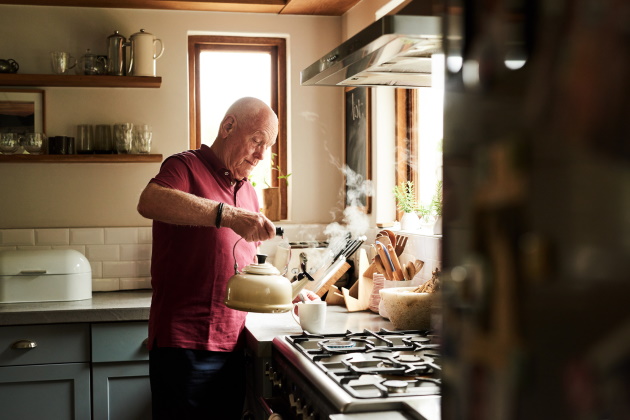 More is more has been the trend in senior living for many years — more variety, more choice, more activities, more open spaces, more gathering places. That trend is poised to reverse itself in the coming decade, believe some industry experts. Developments in technology and construction will make smaller spaces more attractive to aging baby boomers looking for a place to spend their later years.

The senior living industry has struggled with declining occupancy rates in recent years, even as new facilities and communities continue to be built. Meanwhile, many baby boomers are delaying retirement and staying in their homes, partly from necessity and partly as a lifestyle choice. They cannot afford to move somewhere else and are reluctant to leave their communities, family members and friends.

Middle-income boomers in particular have little in the way of assets, aside from their homes, and little or nothing to look forward to in the way of a pension or retirement savings. When they can no longer live in their homes, they will need to find more affordable accommodations than those offered by most senior living communities, preferably somewhere close to where they are living now.

In addition, today’s retirees want a more active lifestyle. Many of those who are leaving their suburban homes are downsizing, getting rid of nonessential possessions and gravitating toward apartments and condos, which require less housework and maintenance. Some are returning to center centers or college towns, preferring a multigenerational environment to a seniors-only community.

In keeping with this trend toward downsizing and minimizing, an option gaining favor with today’s retirees is the so-called “tiny” home. Initially favored by younger, eco-conscious millennials, advances in pre-fab and modular construction and design are making smaller homes more affordable and attractive to middle-income seniors.

A recent article in Senior Housing News reported on the growing number of senior living providers who are engaged in creating “pocket neighborhoods,” village-like walkable clusters of homes with smaller than average square footage designed to foster a sense of community and promote socialization.

Another development originally targeted to millennials but with potential for seniors is robotic interiors that maximize the use of small spaces through automation. Profiled in the Senior Living Innovation Forum’s white paper, “The Future of Senior Housing + Care,” Hasier Larrea, CEO of robotic interiors company Ori Living and formerly with the MIT Media Lab, states, “Technology can allow us to live large in a smaller footprint, which means affordability without sacrifice.”

The robotics act as a kind of “space multiplier,” he says, by allowing for multi-functionality within the same footprint. Think of a Murphy bed, only whole sections of a room can be folded up, hidden behind panels, or shifted from one side to the other automatically with the touch of a button.

Other game-changers are high-speed internet and mobile technologies, which have made in-home healthcare and monitoring more accessible and affordable. The white paper points out that telemedicine and devices such as health-monitoring wearables, voice-activated assistants, and health-aide robots make it possible for relatively healthy elderly persons to live at home yet still have their health monitored without having to make trips to a doctor’s office or clinic. This will help them delay or avoid being transferred to a more expensive care facility.

Even developers of senior living communities are recognizing the need to scale back in order to reduce operating costs and to make their offerings more attractive and affordable. An article about new models in senior living posted to the website Urban Land quotes Margaret Wylde, president of the ProMatura market research group, telling attendees at a senior living conference, “Many properties are overbuilt with amenities.” Her firm's research, she added, shows that residents often prefer nearby aquatic centers and theaters to a higher price tag for an all-inclusive community.

Industry experts believe there will still be a market for more traditional senior living communities. For seniors who do not have the means or the inclination, however, multi-functional smaller spaces can provide an affordable alternative while allowing them to remain part of a community of their peers. And they, the developers, or possibly their adult children will need the expertise of designers to make those reduced spaces safe, pleasant and comfortable.