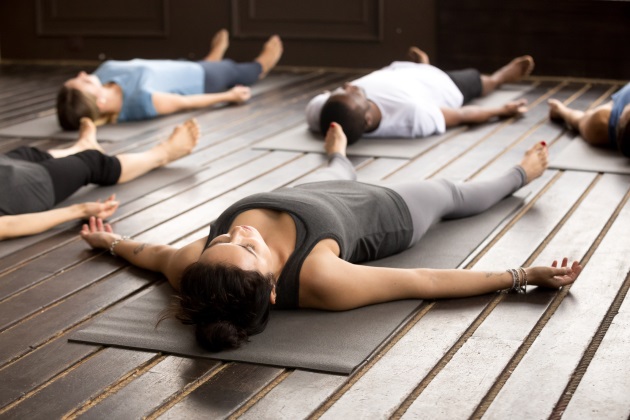 For those of you who are yoga aficionados, you are familiar with Savasana or Corpse Pose. Yes, that’s corpse, as in dead. You know what that looks like.

While many of us prefer not to think of such things, there are those of us who regularly do Corpse Pose and live better because of it.

My experience with Corpse Pose goes back further than my 38 years of practicing it. Raised in a traditional Roman Catholic family, every Ash Wednesday we were reminded at Mass of our mortality with, “Remember you are dust and to dust you shall return.”

I dealt with corpses, tragically, in high school, viewing my beloved dead swim teammates at the funeral home. Little did I know then that this horrific car accident would set the trajectory for the rest of my life.

Not too long after, early in my university studies, I was fortunate to be in the right place at the right time and became the first female diener at our county hospital. Cutting open dead people taught me much more than anatomy.

Our head pathologist was Brazilian and deeply religious. He insisted that we cover the eyes and genitalia of every single body before beginning an autopsy.

Respect and grace for who that person had been permeated our morgue. There was a reverence in our work. Never did I witness the tossing about of body parts often depicted in books or TV.

Then, as an undergraduate in nursing school, my first medical patient died on my shift. I sensed this would happen the moment I met him during our initial rounds.

Wisely, my professor let me attend to this man and his family during his dying, death and aftermath; she took over my caseload that night. I thank her to this day.

My career and life have been informed by death. And this is what I have learned:

Anytime, anywhere, in any circumstance — we can go. I did autopsies on pregnant women, kids, obese middle-aged men, elders, victims of violence … no one is spared.

As much as we think we are in control, we’re really not.

While we can plan for the future, we need to live in the present.

We may never pass this way again.

Here’s where Corpse Pose comes in. It teaches us to be here now as well as to remember, release, rest and reflect.

Just the name “Corpse Pose” reminds us of our mortality.

Totally stopping — which is what Corpse Pose asks us to do — releases us from the rigors (or rigor mortis, if you will) of our life.

Corpse Pose offers us a time to recalibrate, relax and rejuvenate.

Corpse Pose gives us an opportunity to pause and reflect. To rejoice in what is working and revamp what’s not.

Begin by practicing Corpse Pose for just five minutes a day. Simply lie down — nothing fancy. Be consistent, though, and you’ll find the momentum and benefits multiply.

Like a Phoenix rising from the ashes, Corpse Pose gives us an opportunity to be reborn again. Die daily to live better.