Cyberaesthetics:  The next big thing for interior design? 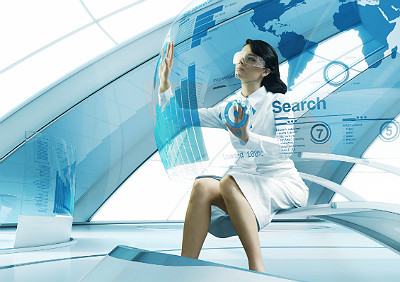 From roll-up screens and slide carousels to superthin flat-panel LED monitors, interior designers have long been challenged to conjure up creative and elegant solutions for integrating technology unobtrusively in a space. Up to now, the technology itself has been passive, just another object in the room. Increasingly, however, designers have a new hurdle to jump: technologies designed to interact with the occupants in the space.

The original "Star Trek" TV series amazed the space-race generation with its vision of talking computers and touch-responsive control panels. If Mr. Spock were to come across an iPhone 5 in some galactic museum, he would no doubt declare it “fascinating,” but the technology would feel familiar.

In 1950, Ray Bradbury published a futuristic story about a family living in a “smart home” — “The Happylife Home." The home includes a virtual reality nursery that interacts telepathically with the children’s brain waves to realize their imaginings. Although we have not quite reached that level of sophistication, “smart home” technology, virtual reality simulators and thought-operated prosthetic devices have already begun to move from the R&D stage to commercial applications.

How might these technologies impact the practice of interior design? Yesterday’s touch-screen kiosks appear almost quaint compared to what is now available to the average consumer. More and more, interactive tablets are being integrated into public and commercial spaces. They are replacing placards in museums to connect visitors more directly and comprehensively with the historical and cultural context that gave rise to the objects and artifacts in their collections.

Retailers are using them, too, in stores and pop-ups to provide customers with a hybrid onsite and online shopping experience. For the rebranding of its flagship store, Barney's New York worked with the tech studio 2x4 to create a 30-foot long banquet table whose surface is an interactive "digital river" made up of 28 touch screens for its new Genes@co-op Cafe. Customers can use the screens to order food and browse through Barney's offerings while they sip their coffee.

Interactive technologies also are being employed in the home to enhance convenience and security. One area of particular interest is the use of smart technologies to support aging in place. In September, a Silicon Valley startup led by former Apple, Microsoft and eBay employees unveiled a new service called Lively that was designed to help the elderly maintain their independence.

The system, which is being piloted in Sarasota, Fla., uses tiny sensors placed throughout the house to monitor basic daily activities, like whether the occupant is up and about, has taken his/her pills on time or has exited the house. Through a website and auto-generated emails, the system lets relatives know if something appears amiss, even if they are thousands of miles away from their loved ones.

Undoubtedly, we are just beginning to realize the potential of these technologies. On the one hand, they offer designers previously unthinkable possibilities for creating amazing interiors. On the other, they will present designers with a new set of challenges. Foremost of these is becoming knowledgeable about how they work, how they integrate with the rest of the environment, and how they are supported and maintained.

The answers to these questions can only come in time through further research and practice. Meanwhile, the demand surely will grow for talented and knowledgeable experts who can produce innovative solutions to integrate these technologies so that their look and function harmonizes with the rest of the space — what we might call “cyberaesthetics.” For future-oriented designers, the opportunity presents itself to create a whole new design specialty.