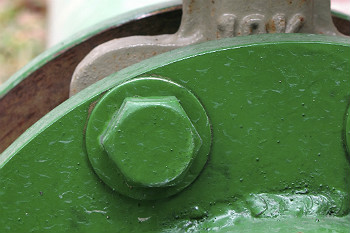 One of the most critical aspects of an effective coating application is achieving proper coating adhesion to either the substrate or between coats. While there are many variables that can lead to substrate or intercoat adhesion failure, there are several common mistakes that are the culprits.

In some instances, substrates like copper or brass will oxidize during higher cure cycles and create substrate adhesion problems, so lower-cure coatings are often recommended when working with these substrates.

Where applicable, grit blasting is a vital step in your coating process because it achieves several goals. Firstly, it cleans the part and removes any old coatings or residue that might have built up on the part from prior use or from the manufacturing process. Secondly, it creates more surface area to anchor the coating.

Aluminum oxide is a commonly used blast media, but when a less aggressive profile is desired, reduced pressure could be used or a different blast media, like glass bead or even walnut shells. Some parts don’t lend themselves to be effectively grit blasted, so chemical treatments like phosphating or anodizing are performed.

Environmental contaminants in your shop could lead to substrate adhesion failures as well. It is always recommended that, once the part has begun the coating process, latex and nitrile gloves should be worn when handling the part. Additionally, after the blast process, it is good to blow off the part with air to remove excess grit and wipe the part down with acetone or even hot, soapy water.

One cause, could be an undercure of the topcoat, but more commonly is the result of the primer coat being applied too thickly. Primers are meant to be applied as thin films (.5 mils or less), as they are adhesion promoters and should not be built up to achieve heavy film builds or to enhance color.

Upon visual inspection, when troubleshooting an adhesion problem, it is important to know these two types of failures. When you have intercoat adhesion, the primer has adhered to the substrate, and just the topcoat will peel off. Substrate adhesion failure displays lack of adhesion of the entire coating system that has been applied.

Once identified, backtrack your steps to find your possible solution.

Chris Lord is an account manager at Intech Services, working in technical support and sales of fluoropolymer coatings. Intech Services, Inc. is the sole distributor of DuPont Teflon industrial coatings for more than 20 years.