Are flying cars and electric airplanes the next frontiers for transportation? 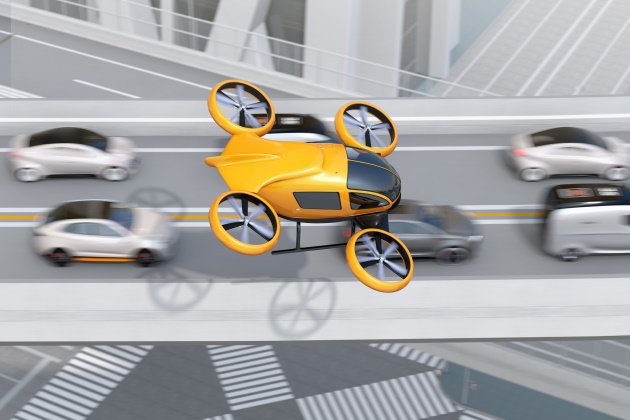 Flying above traffic in a car? It may be more than a drawing soon.

The world’s auto and aviation industries and an ever-evolving list of innovative startups are increasingly entering a race to revolutionize air travel as we know it today. Flying cars and electric airplanes are the primary objectives of a host of major corporations and deep-pocketed investors.

Boeing, Airbus, United Technologies, Textron, Uber, Google, GM, Ford, Porsche, Toyota and Hyundai are among the industry giants with a horse in the race — and winners will “future-proof” themselves as they develop tomorrow’s modes of transportation.

While the concept of flying cars has long been regarded as a Jetsons-like science fiction dream, a surprising number of new prototypes suggest that it’s actually quite close to becoming a reality. However, the adoption of flying cars faces some major roadblocks.

“There are several hurdles before commuters are whizzing through the air” says Dalvin Brown in USA Today. “Many of the vehicles now being imagined require magical electric batteries that don’t exist — yet.” Currently available electric batteries are good for only 20-30 minutes of flight.

The legal barriers related to small aircraft are arguably a greater challenge than mastering the technology.

Developers face strict compliance guidelines from both the FAA and National Highway Traffic Safety Administration. Certifying a new aircraft is a lengthy and very costly process.

Such red tape may give foreign developers a leg up in the race to the marketplace. Slovakian company Aeromobil is already in production with a car featuring stowable wings, and German startup Lilium is seeking certification from European regulators for its sleek pilotless prototype jet that is capable of taking off and landing vertically. Well-financed flying car projects are underway in China and Australia as well.

There are other factors hindering the widespread adoption of flying cars: both cost and the fact that the great majority of people are not trained and licensed to fly an aircraft. Cost estimates for a sampling of models under development in the U.S. range from about $300,000 to $1.6 million prohibitive pricing for all but the upper crust. For these reasons, most developers are working on taxi services as a launching point for flying car concepts.

As of today, there are no actual certified flying cars available for purchase in the U.S. But Terrafugia, a small Massachusetts-based company, may be the first out of the gate with its Transition — a road-worthy light-sport airplane with four wheels and foldable wings. The FAA gave Transition an exemption allowing it to be certified as a light-sport aircraft and it is expected to go on sale sometime this year with a price tag of $300,000 to $400,000.

There’s hope in the airline industry that someday electric airplanes can do for the skies what Toyota’s groundbreaking hybrid Prius did for the roads.

With steady improvements in electric motors and the batteries needed to power them, the probability of electric airplanes cruising (quietly) overhead is a virtual certainty. In fact, the world’s first fully electric commercial aircraft took flight in Canada on Dec. 10, 2019.

Although further test flights and certifications from regulators will be required, Harbour Air’s Founder and CEO Greg McDougall expressed enthusiasm, saying he’s “all in to electrifying the company’s entire fleet of more than 40 seaplanes.” On top of greater fuel efficiency, the company hopes to save millions in maintenance costs because electric motors require “drastically less upkeep than internal combustion engines,” according to McDougall.

Battery power remains a challenge to electric aviation. Ganzarski points out that the e-Beaver could fly only about 160 km (94.4 miles) on lithium battery power. “While that’s not very far,” he said, “it’s sufficient for the majority of short-haul flights run by Harbour Air.” More efficient batteries will eventually power longer flights.

So, in the opening stages of the “electric aviation age,” it is a given that developers have to start small.

California-based startup Ampaire is taking an early lead among the nearly 100 electric aviation programs underway around the world by converting a six-passenger Cessna 337 into a hybrid model with both an electric motor and a conventional combustion engine. The plane, dubbed the Electric EEL, has proven to reduce fuel consumption and greenhouse gas emissions by 50%. It is expected to enter commuter service in 2021.

Eviation Aircraft of Israel introduced an all-electric nine-seat prototype named Eviation Alice at the Paris Airshow in June 2019 and is aiming to begin short-range commercial flights within the next couple of years. Built 95% from composite materials, Alice is powered electrically through three propellers — two at the wingtips and another on the rear fuselage. Battery range is reported to be 1,000-1,200 km (620-745 miles) at 440 km/hr (275 mph).

With so many companies and even governments involved in electric aircraft development, there are many new and exciting projects in the works for this fast-emerging aspect of aircraft design and propulsion. The big challenge for electric motors, however, is the size and weight of the batteries needed to power them. The bigger the plane, the higher the hurdles.

Airbus is studying the prospect of developing a hybrid version of its hot-selling single aisle, 240-passenger A320 — but not until 2035 at the earliest.

For the foreseeable future, development appears to be focusing on the tried-and-true Prius-type hybrid technology that connects an electric motor powered by batteries with a conventional gasoline-powered engine.

Aircraft engine-maker United Technologies has reengineered a Bombardier Dash 8 regional jetliner that employs an electric motor for supplemental power during takeoff and ascent and a conventional turboprop engine for cruising.

Cars have long been subject to rules on exhaust emissions, but neither airplane manufacturers nor airlines are subject to binding limits. The aviation industry currently accounts for about 2-3% of global greenhouse gas emissions — but expanding routes and surging passenger numbers point to ever-increasing pollution.

While current battery technology limits pollution reduction, airlines and planemakers are acutely aware of the growing backlash from climate-conscious customers, so they are doing what they can to reduce their carbon footprint — and electric technology is leading the way.