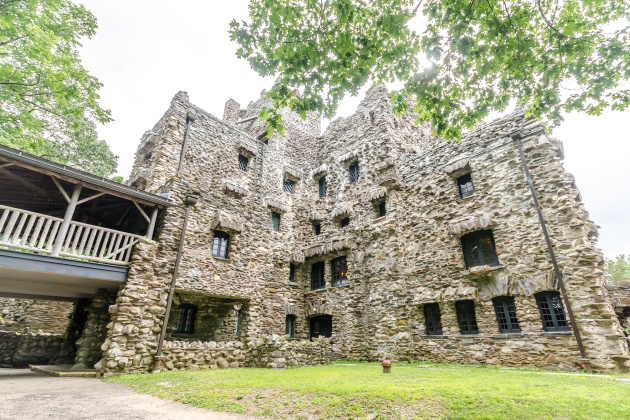 While fairytale castles are most commonly associated with medieval Europe, you don’t necessarily have to cross the pond to see one. America herself is home to a number of splendid castles — if you know where to look.

Admittedly, most of them are copycat castles built in the 19th and early 20th centuries by wealthy individuals, not as fortresses, but as residences — and in some cases as ego-satisfying follies.

Have a look at our list of America’s top 10 castles and take time to visit one or more of them during future road trips. They are all open to the public, most offer guided tours, and each of them has a fascinating story to tell.

Unwary visitors are surprised to see a truly grand European castle on the Massachusetts shoreline. The imposing structure served as the home and laboratory of American inventor John Hays Hammond Jr., a prolific inventor who built this medieval-style castle between 1926 and 1929.

Constructed using a mix of native stone and various Roman, medieval and Renaissance period artifacts Hammond collected during trips to Europe, the castle now serves as a museum and is open to the public for both guided and self-guided tours.

From the outside it appears to be in a ruined state, but Gillette Castle was designed that way by multitalented actor, director and playwright William Hooker Gillette. The unique fieldstone castle was built in 1914 and served as home to the legendary actor, best known for his portrayal of Sherlock Holmes on stage.

Built to resemble a medieval fortress, the castle is the centerpiece of a 184-acre estate overlooking the Connecticut River and is now preserved as a state park. The 24-room structure is notable for its modern innovations like built-in couches and sliding tables — and its intricately carved wood doors. Gillette Castle State Park is open daily mid-spring through mid-October.

Situated on tiny Pollepel Island in the Hudson River, 60 miles upriver from New York City, the eerily beautiful remains of Bannerman castle have a fascinating story to tell. Built in 1901 by Scottish immigrant and munitions merchant Frank Bannerman, the mock Scottish castle served as an arsenal — an odd purpose for a castle one might think — but perhaps not for an arms producer. Following Bannerman’s death in 1918, the castle fell into disrepair and a fire further damaged it in 1969.

Now preserved within the bounds of Hudson Highlands State Park and managed by a trust, the castle is open seasonally on weekends for special events and guided boat and kayak tours.

It seems an understatement to call this imposing structure, located on a 67-acre estate on the edge of the Hudson River, a mansion. It certainly looks like a classic Gothic Revival castle, and that’s what acclaimed architect Alexander Jackson Davis had in mind when he designed it in 1838 to serve as the home of New York City Mayor William Paulding.

Lyndhurst has had several other noteworthy owners since its construction, including railroad magnate Jay Gould and a French duchess who bequeathed the property to the National Trust for Historic Preservation in 1961. The mansion features 19 elaborately decorated rooms that house a vast collection of art and antiques. The property is available for tours and special events Thursday through Monday from April through December. 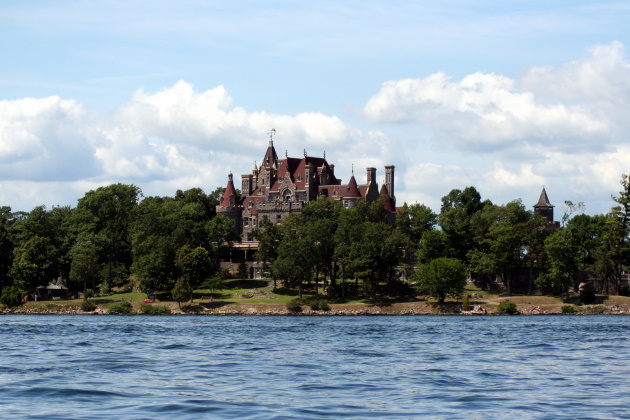 Tucked away on a tiny island on the St. Lawrence River in upstate New York’s Thousand Islands, this turreted Rhineland-inspired stone castle was built in 1900 by millionaire hotel magnate George C. Boldt as a summer home for him and his beloved wife Louise.

Unfortunately, Louise died just as the castle was being completed and the tragedy devastated Boldt so much that he never returned to the home. The castle sat unoccupied for more than 70 years until the Thousand Islands Bridge Authority acquired it and restored it to its present magnificent state.

The castle is decorated with period furnishings, and the grounds include a yacht house, Italian gardens, a tower fortress and a dovecote. Boldt Castle is accessible only by water taxi, boat tour or private craft and is open to visitors from April to mid-October.

The former home of archaeologist, anthropologist and ceramic designer Henry Chapman Mercer, Fonthill was constructed between 1908 and 1912 as residence and a museum showcasing Mercer’s extensive collection of tiles and prints. Designed by Mercer himself, it is a somewhat ungainly pastiche of Medieval, Gothic and Byzantine styles and features 44 rooms, 18 fireplaces and more than 200 windows.

Mercer bequeathed the property to Bucks County Historical Society that serves as trustee and operates Fonthill as a historic house museum. The six-story Mercer Museum nearby is home to one of the world’s most comprehensive collections of pre-industrial age tools. Both the castle and museum are open daily for tours. 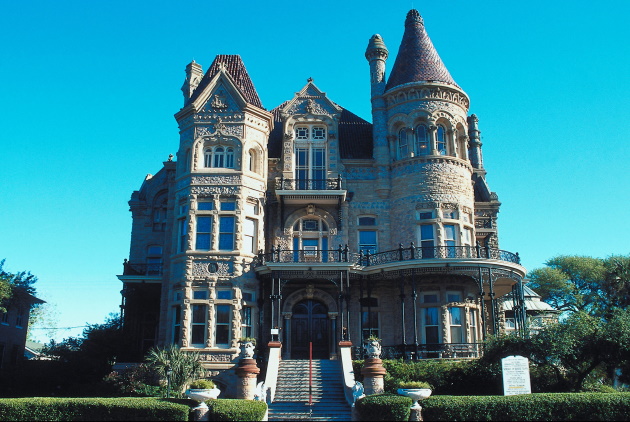 Formerly known as Gresham Castle, this magnificent Victorian mansion was built by lawyer and railroad entrepreneur Walter Gresham and designed by noted Galveston architect Nicholas Clayton. It was constructed almost entirely of stone and steel from 1887 to 1892 — and proved sturdy enough to withstand the Great Storm of 1900 that destroyed most of Galveston.

The Chateauesque-style mansion is frequently cited by architectural historians as one of the nation’s most significant Victorian structures. In 1923, the Roman Catholic Diocese of Galveston purchased the house to serve as the Bishop’s residence, but it is now owned and operated as a museum by the Galveston Historical Society.

The mansion’s opulent interior is an eclectic mix of different styles and features a dramatic mahogany stairwell as well as many decorative wood carvings and stained-glass windows. Self-guided audio tours are offered daily.

What is arguably America’s most beautiful castle can be found nestled among 171-acres of vines and forest in the hills of Napa Valley, where it serves as an award-winning winery. Castello di Amorosa was built over a 13-year period from 1994 to 2007 by fourth generation winemaker Dario Sattui.

Sattui was determined that the castle be as authentic as possible and built the structure, within the limits of local building codes, using the same techniques medieval builders used 800 years ago. The result is the only authentic medieval (13th century) Tuscan castle in the U.S.

The castle covers 136,000 square feet including 107 rooms (90 of which are used for winemaking and storage). Features include a functional drawbridge, a dungeon and torture chamber, a medieval church, a great hall decorated with Italian frescoes and an enormous barrel room with ancient Roman cross-vaulted ceilings. The castle is open daily for tours and wine tastings.

Built between 1919 and 1947 by American newspaper tycoon William Randolph Hearst from designs by noted architect Julia Morgan, this lavish hilltop retreat overlooking the coastal community of San Simeon is America’s best-known and most visited castle. Hearst nicknamed the estate La Cuesta Encantada, Spanish for “the enchanted hill,” and upon completion, the complex included four buildings, 165 rooms and more than 120 acres of terraced gardens with fountains, pools and stunning views galore.

One of the most outstanding features of the castle’s main building is the Gothic Study with its dramatic vaulted Spanish ceiling dating to 1400. Both Castle and grounds are home to Hearst’s legendary art collection. Hearst Castle is open daily for tours. 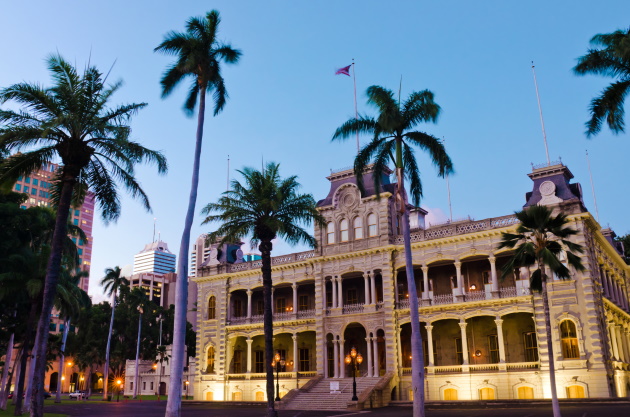 Honolulu’s Iolani Palace was once a royal residence.

Here’s a castle fit for a king. Seriously. Hawaiian King Kalakaua built Iolani Palace in 1882 to serve as the home of the island monarchy. King K wanted his palace to equal the majesty of European castles he had seen on his global travels and he fitted it with the finest furnishings and latest technology of the day.

The palace, located in downtown Honolulu, served as home to the king and Queen Liliuokalani until the monarchs were overthrown in 1893. It has since served a number of purposes, including that of Hawaii’s Capitol for nearly 80 years.

Today, Iolani Palace is a grand museum and is said to be the sole example of “American Florentine” (a mix of Italian Renaissance and native Hawaiian architectural styles). It is the only royal residence in the U.S. The palace is open for tours Monday-Saturday.