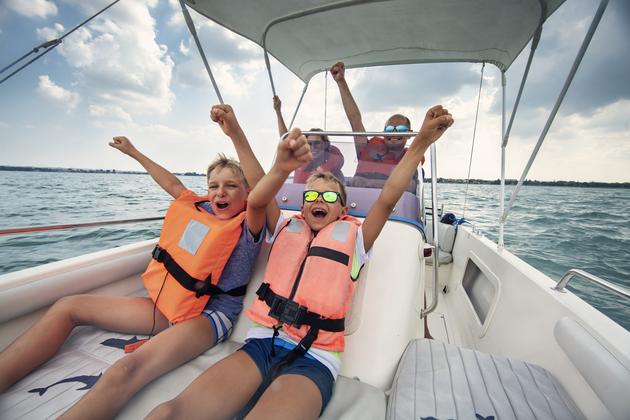 It's hard to imagine a better way to spend a summer day than by splashing about in a refreshing lake. America is home to thousands of them, of course, including about 200 major lakes. Checking out possibilities across the country, we've come up with seven particularly splendid lakes for family vacation fun. So, grab your floaty and join the sun squad at one of these shimmering gems. 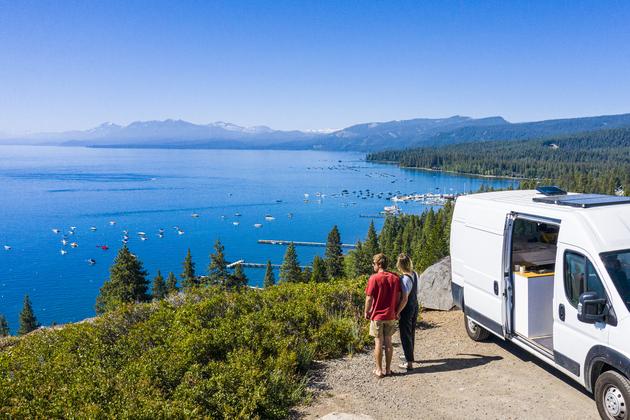 Statistics speak for themselves in describing one of the world’s most impressive lakes: Situated on the California-Nevada border at 6225 ft., Lake Tahoe is the largest alpine lake in North America – and the largest in volume after the five Great Lakes. Lake Tahoe also is the nation’s second deepest lake at 1,645 ft., just behind Oregon’s Crater Lake, at 1,949 ft. Notable too is the quality of Tahoe’s water, rated among the world’s purest lake waters at 99.994% pure -- nearly that of distilled water.

A day-long drive around the lake makes for a scenic summer adventure and there are numerous beaches and marinas (Timber Cove and Tahoe Keys Marinas are the largest) from which to enjoy a host of watersports and to rent pontoon boats, paddleboards, kayaks, jet skies, sail boats and power craft of all sizes. Boat tours of the lake are available by the dozen, and leading the flotilla is the massive sternwheeler M.S. Dixie II. The Nevada side of the lake features an array of resorts and casinos, and there’s an efficient fleet of shuttle busses operating between the lake and Reno-Tahoe International Airport. 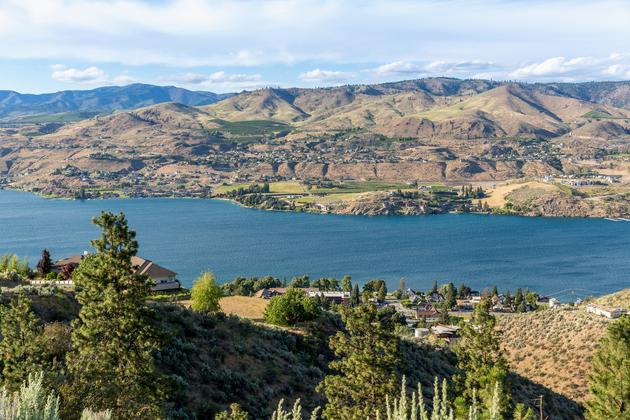 A favored getaway spot for Seattleites, Lake Chelan is a sinewy 55-mile long lake, hemmed in on both sides by Mt. Baker-Snoqualmie National Forest mountain range. Glacial runoff from the mountains feeds into the Chelan River that broadens to form the 33,340-acre lake.

While there are plenty of lakeside activities in the town of Chelan – where there’s a popular farmer's market – and the smaller village of Manson, Lake Chelan is a definite draw for nature lovers and active outdoor types. Hiking, biking and boating lead the list of things to do – and anglers find the fishing is good for such species as rainbow and lake trout, sockeye salmon and smallmouth bass. Manson is a gateway to the region's more than 30 wineries and fruit orchards, so wine-tasting is another popular option for visitors.

A highlight of a trip to Chelan is the Lady of the Lake boat trip that visits Rainbow Falls, a stunning 321-foot cataract fed by dozens of glaciers. 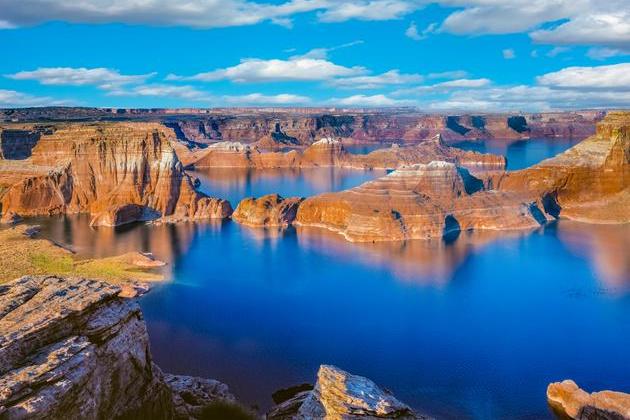 Even though stricken by drought-driven declining water levels, Lake Powell remains one of the world's most amazingly beautiful bodies of water. Its colorfully striated cliff walls and canyons are simply mesmerizing. One writer described it as looking like a flooded Grand Canyon. Powell is a man-made reservoir on the Colorado River, straddling the border between Arizona and Utah. It was created by the flooding of Glen Canyon from Glen Canyon Dam, completed in 1966.

Lake Powell is 186 miles long and has nearly 2,000 miles of shoreline – longer than the entire west coast of the United States. It features 96 major side canyons, some of which are 15-20 miles in length. Although there are some good views of the lake from Hwy 89 near Page, AZ, Powell is boater’s lake. You can bring your own or rent every kind of watercraft imaginable at one of the marinas. Available for rent are houseboats (ranging from 45 to 75 feet), powerboats, jet skis, water skis, wakeboards, paddleboards, tubes and kayaks. Powell is the most popular lake in America for houseboating by a wide margin.

Low water levels have forced the closure of some launch ramps for the summer of 2021. Those currently available include Wahweap Main Launch Ramp, Bullfrog North Launch Ramp and Halls Crossing Launch Ramp. For an up-to-the-minute report on boating conditions, call 888-896-3829. 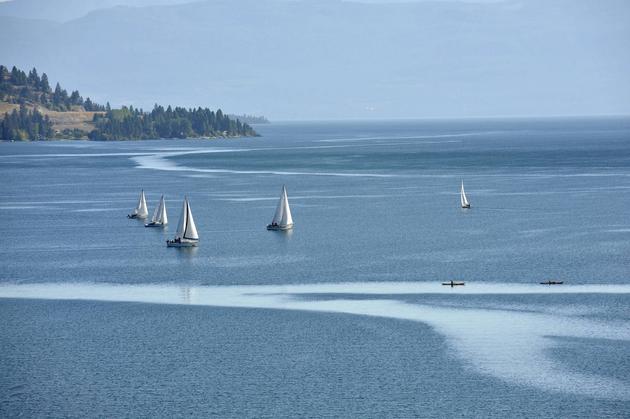 Aptly named, this lake does appear to be strikingly flat, stretching across nearly 200 square miles of northwestern Montana. One of the nation's largest natural freshwater lakes, it was once described by 19th century British-Canadian explorer David Thompson as a "fine sheet of water."

This region of Big Sky Country is perfect for nature lovers and wildlife watchers. The lake is home to several islands that shelter an incredible variety of birds and animals. Boat out to Bird Island and you’re virtually guaranteed to see herons, eagles, geese and osprey. On Wild Horse Island you can hike forested trails and open meadows with a good chance of spotting deer, bears, coyotes, bighorn sheep and sometimes even a namesake wild horse. The island is a two-mile paddle by kayak from Dayton Yacht Harbor.

Flathead is great for fishing as well with nice catches recorded for brown, rainbow and brook trout, largemouth bass, smallmouth bass and yellow perch. The lake also boasts plenty of motels, cabins and campsites, especially around the town of Bigfork, a bustling resort town with a growing art scene and shops and eateries galore. Summer visitors should be sure to visit one of the region’s many roadside fruit stands to sample the sweet, tasty and justifiably famous Flathead cherries. 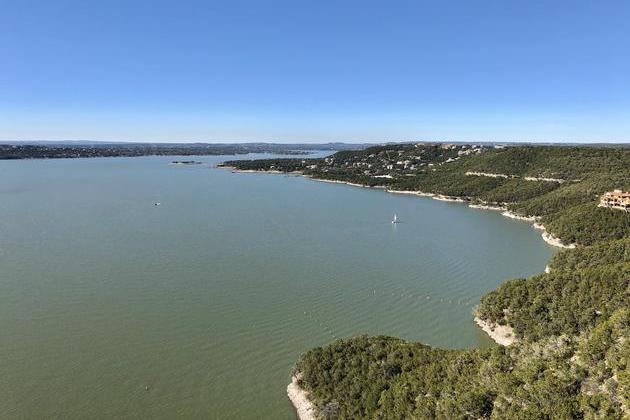 It almost goes without saying – that everything is oversized in Texas. That certainly applies to Lake Travis, near Austin. It's an enormous body of water – 63.75 miles long with more than 271 miles of shoreline and covering 18,829 acres. As the "Crown Jewel" of the central Texas highland lakes, Lake Travis is the most visited freshwater recreational destination in the state.

Oddly enough, the lake's bottom may be its most unique feature. Travis' bottom is solid limestone (no mud!), resulting in crystal clear blue waters that make it a freshwater haven for watersports enthusiasts of all kinds.

There are numerous access points around the lake hosting a variety of lodging options, RV parks, campgrounds, marinas and restaurants. By far the most popular restaurant is the multi-level Oasis, idyllically situated atop a 450-foot bluff overlooking the lake. A number of lakeside parks provide facilities for picnicking, grilling, hiking, swimming and boat ramp access. There also are more than 20 marinas, offering an abundance of watercraft rental options, including houseboats, party barges, pontoon boats, jet skis, wave runners, sailboats, kayaks and paddleboards. 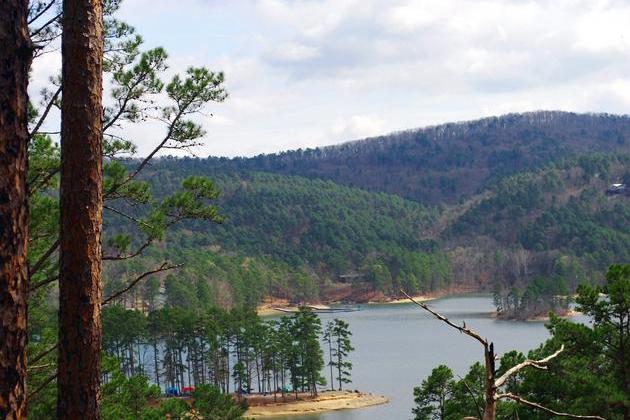 Arkansas's largest lake, Lake Ouachita (pronounced "Wash-ah-taw"), offers more than 40,000 acres of crystal clear water surrounded by 1.8 million acres of verdant Ouachita National Forest. Man-made, Ouachita was formed by completion of the Blakely Mountain Dam by the U.S. Army Corps of Engineers in 1954 for purposes of flood control, hydropower, fish and wildlife management and recreational use.

Although situated just minutes away from the popular tourist town of Hot Springs, Ouachita has a remote feel to it – enhanced by the fact that no private homes are allowed along its rustic 600-mile shoreline. There's a lot to do here, however, with an abundance of water activities, including kayaking, canoeing, snorkeling, scuba diving and fishing. Hiking and mountain biking are the leading land-based recreational pursuits.

Fishing is particularly good and anglers come from all across the country to cast for Ouachita's lunker catfish, striped bass, crappie, bream, walleye and largemouth bass. With a total of nearly 100 campsites positioned along the shore and throughout the national forest, there are plenty of tent and RV sites, plus fully equipped cabins for those who don’t choose to rough it. 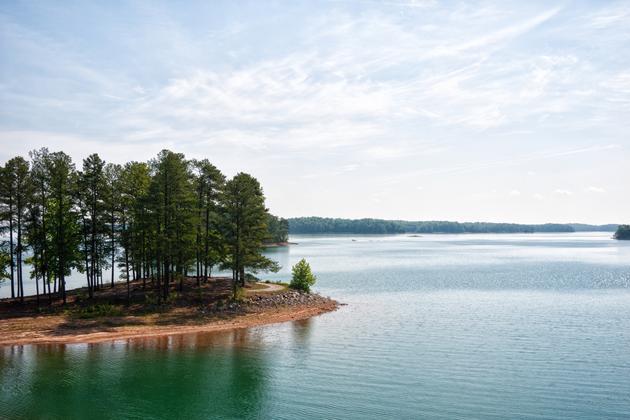 Another Corps of Engineers creation, Lake Sydney Lanier – better known as simply Lake Lanier – stretches over 38,000 acres with 692 miles of shoreline along the foothills of the Blue Ridge Mountains in northeast Georgia. It was formed in the 1950s by constructing Buford Dam and impounding the Chattahoochee River. The lake began filling in 1956 and reached its normal elevation of 1071 feet in 1959.

More than 100 islands dot the surface of Lake Lanier, ranging from tiny islets to 148-acre Three Sisters Island, and they provide popular boating destinations for hiking, wildlife viewing, swimming, picnicking and geocaching. Anglers flock to the lake for its excellent bass fishing. Species found here include black, spotted and largemouth bass – plus hard-fighting striped bass that are stocked annually.