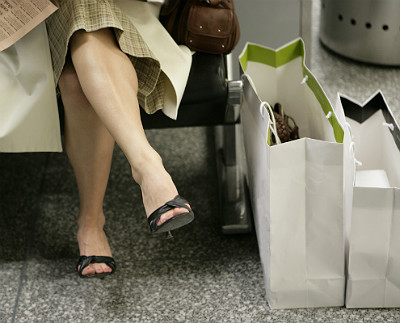 The latest airport retail trends show two distinct expansion characteristics — lateral and vertical. The former is natural, but it is the advent and addition of the latter that gives more depth to the trend and has made a complete 180-degree change in the airport retail scene.

Gone are the days when airports would sport a few small shops selling coffee, magazines and smokes, maybe with a small, not-so-fancy restaurant. A few bigger airports would boast a VIP lounge at the most. Thankfully, those bland days of travel are over.

Today, airports are one of the biggest retail zones for all kinds of businesses, basics to brands. They are hip and happening and designed to lure in the traveler for more than impulse shopping. With more and more changes being done to the retail zones in airports, it is becoming difficult to resist the shopping lure here. If you are not in a hurry you buy; if you are in a hurry even then you buy. The trend has developed as a demand for a better traveler experience, but a lot of onus also goes to business owners who were quick to realize the potential of airport retail business and capitalize on it.

The fad is also global in nature and has simultaneously affected developed as well as developing nations. The deepest impacts have been the most retail-centric economies which is only natural.

However, a recent NCR survey of airport retail in five countries shows some surprising figures. Not surprisingly, the United Kingdom led the way with 70 percent of travelers reporting they had purchased things from airport retailers. But next came the United Arab Emirates (59 percent), China (55 percent) and finally the United States and Brazil (47 percent each).

This shows two things — the high travel figures to and from these countries has laid the foundation for good retail business at these airports. It also shows that fast-growing economies of the world like China and Brazil are slated to lead the next generation of revenues.

The lateral expansion of business shows that the airport retail zone will no longer have the terms utility, necessity or basic branded with them. It is now all poised to deliver more than what you need and to impress the traveler. Even when travelers are rushing from one terminal to another, their peripheral vision will be dazzled, keeping the wow factor alive at all times.

Travelers can now get everything they need and beyond from the airport retail zone. The experience is that of an upscale mall where one can get the best items, loiter around and spend time all day, shop or window-shop until heart is content. The competition is not between the shops but between airports as to which offers more options and which entertains travelers more.

The vertical expansion of airport retail business has been more subtle, and in many ways more satisfying. Even with bigger and busier airports opening up their retail zones, the international duty-free terminals typically offered more interesting options for travelers. But not anymore.

Now, all the coveted brands and upscale global retail offers are easily available for both domestic and international travelers. From Bulgari to Louis Vuitton, from Prada to Chanel, nothing is out of reach.

Books and chocolates are no longer the only comfort factors in airport retail trends anymore. Some of the best restaurant chains have opened across airports offering gourmet fares instead of the unappetizing and bland food that was once on the menu. Fine dining between fights is no longer a dream.

And the offers are not limited to food and fashion. One can expect to get the latest tech products — from iPhones to iPads. In short, the modern day airport is a shopper's paradise. Since maximum sales are impulse driven, business owners can expect a faster break-even at airports than anywhere else, which means faster expansion. Airports themselves can get more out of their space and rentals and turn around their books in black in no time at all.

Changes in airport retail trends have been a boon for airport authorities, business owners and definitely the travelers. With globalization and an increase in air travel, there have also been delays, layovers and more waiting. This invariably gave way to passenger frustration and complaints. The retail boom has changed all that. Now the frustration level has dropped several notches, with layover time spent in productive shopping — a win-win for all.