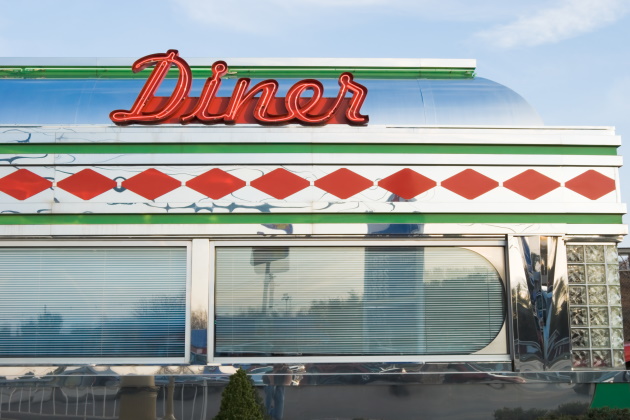 Like baseball, grandma’s apple pie and Elvis, a shiny bullet-shaped diner surely plucks the strings of American nostalgia. For nearly a century, hungry travelers have relied on the classic American diner for fast, affordable comfort food.

“As a uniquely American creation, diners are and always will be a melting pot of good food and good people,” says Richard Gutman, author of “American Diner Then & Now.”

In his book, Gutman identifies 35 companies that manufactured diners (also called dining cars or lunch cars) from the early 1900s onward. Most are similar in design to railway dining cars and the majority of them were built in the northeastern U.S.

Nearly 10,000 diners were factory-built, and they peaked in popularity between the 1920s and 1950s. Only a few dozen authentic examples remain in operation today.

Five companies led the pack in turning out prefabricated diners. The top manufacturer was the Jerry O’Mahony Diner Co. of Elizabeth, New Jersey, a firm that produced more than 2,000 diners between 1917 and1941.

We’ve tracked down living examples from each of these makers — eight of them in total — and should your travels take you anywhere close by, we encourage you to go retro and give a diner a try.

This Streamline Moderne diner from Jerry O’Mahony Diner Co. is one of the most well-traveled diners in the nation. It was built in 1939 to serve as an exhibit in the New York World’s Fair. Following the fair, it saw duty in Massachusetts and Rhode Island until 2007 when it was purchased by a Utah businessman and moved to the Utah mountain town of Oakley, near Park City.

It holds the distinction of being the first authentic prewar streamline diner west of the Mississippi River. Breakfast specials include omelets, frittatas, biscuits and gravy, corned beef hash and chorizo, while popular dinner plates include roasted lamb sandwiches and house-made mac and cheese.

Following its manufacture in 1953 by Mountain View Diners in Signac, New Jersey, this 60-foot-long diner was shipped by train to Plainfield where it was operated by a progression of owners until 2008. It was rescued from tear-down a couple of years later by a pair of local residents who undertook a three-year restoration of the diner and relocated and reopened it in Plainfield’s recently revitalized Town Center.

It’s justly famous for its breakfasts, especially the steak and egg skillet, biscuits and gravy and country-fried tenderloin. Popular dinner dishes include the Philly cheese steak sandwich, catfish tacos and a roster of six different kinds of burgers. If there’s any room left, the Oasis offers a dozen kinds of pie — including sweet potato and rhubarb.

St. Paul’s Art Deco landmark (a 1937 Jerry O’Mahony model) boasts a long list of media credits, including appearances on the Food Network series “Unwrapped,” “Roker on the Road” and Rachel Ray’s “Tasty Travels.” It has been seen on the pages of Smithsonian and National Geographic magazines and it is listed the National Register of Historic Places.

Family-owned and operated for three generations, Mickey’s has remained open 24 hours a day, 365 days a year since it debuted in 1939. That is until just recently, when owners decided to take advantage of the pandemic-related slowdown to close temporarily for some extended maintenance.

They will soon be back to serve up specials from their four-page menu Streamline Moderne an appetizing roster of burgers, patty melts, fish and chips, mulligan stew, bean soup and old-fashioned hand-dipped malts and shakes.

Situated across the street from the train station in Summit, this 1939 diner from Jerry O’Mahony is a favorite with commuters and is patronized by some of New Jersey’s power elite. Jim Cramer, the ranting and raving stock market guy on CNBC, and former New Jersey Gov. Jon Corzine are reported regulars.

Built in 1949 by the Worcester Lunch Car Co. and now listed on the National Register of Historic Places, Wilson’s played a bit part in the 2013 movie “Labor Day.”

In everyday life, however, it serves as a no-nonsense source for a well-priced breakfast or lunch. The breakfast menu features such dishes as walnut, blueberry or chocolate chip pancakes, crunchy caramel French toast and a huge variety of egg-based meals including eight varieties of eggs Benedict and 20 different kinds of omelets.

This 1946 Fodero diner nestled in Manhattan’s West Chelsea has retained its original Streamline Moderne exterior — but the interior has been transformed into a slick upscale retro restaurant. Chef John De Lucie delivers straightforward American classics, including juicy burgers and crunchy fries, but he also cooks up some more sophisticated fare including crispy artichokes with aioli, bucatini, potato rosti with chives and prime hanger steak.

History is ever-present as you tie into an oversized platter of blueberry pancakes at this beautifully preserved diner fabricated by Silk City Diners of Patterson, New Jersey. A permanent fixture and a local dining favorite in Bennington since 1948, the Blue Benn is currently closed as new owners prepare for reopening — hopefully sometime this year. Some of the diner’s headline dishes, including spinach pesto omelets, turkey pot pie and homemade tapioca pudding, will undoubtedly make a return.