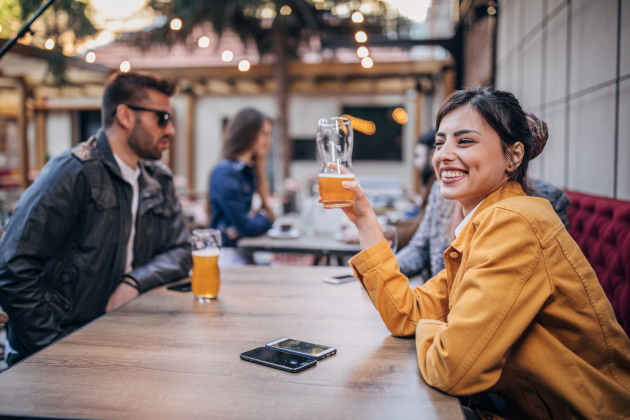 The beer garden (or biergarten to be linguistically accurate) is a traditional German outdoor pub that serves beer and eats at communal tables. American breweries and restaurants have added their own twist to this traditional and culturally significant gathering place.

Most U.S. beer gardens are of Bavarian heritage or influence, but beer-loving Bohemians from the Czech Republic and Slovakia have maintained a beer garden tradition of their own. Here are seven of the best beer gardens America has to offer.

In a city renowned for its mindboggling number and variety of craft breweries, Prost! stands out as Portland’s most authentic and convivial beer garden. Customers hang at large communal tables slugging down steins of Hofbrau, Bitburger and Spaten while snacking on pretzels, bratwurst, currywurst and braunschweiger,

Arguably America’s most elegant and elaborate beer garden, Stone Brewing’s multi-acre spread at Liberty Station is named after a U.S. Navy mess hall that once occupied the site.

The Biergarten at the Standard, Los Angeles

Downtown L.A. might not seem the place for a beer garden, but low and behold, there’s one — complete with wurst, pretzels and dirndl-dressed Bavarian biermaids — perched atop the Standard Hotel at 550 S. Flower Street. The rooftop terrace at the hip, modernist Standard is decked out with a pool, bar, waterbed pods, fire pits and sculptured topiaries. A live DJ is usually on hand in the evenings.

Colorado is justly famous for its craft beers, and Lowry’s 9,000 square-foot covered outdoor pavilion is one of the liveliest spots in Denver to give these Rocky Mountain brews a try. Guests gather round huge Oktoberfest-style communal tables (with appropriate social distancing) to partake of their favorite bier, wine or cocktail while nibbling on gourmet brats and freshly baked pretzels. Regulars recommend the elk jalapeno-cheddar brat.

Housed in a restored Civil War railroad depot, this beer garden oozes atmosphere and character to offer the best elements of a traditional biergarten combined with the unique flavors of the American South. The focus here is on craft beers and contemporary Bavarian-Southern fusion food, including brats, spaetzle, schnitzel, smoked bier wings and Carolina pork sliders. Nightly events include cornhole tournaments, live bands and trivia nights.

Here’s a hopping biergarten, situated at the corner of 14th and S Streets in the nation’s capital, offering a friendly, casual backyard barbecue vibe. And it is, in fact, highly regarded for its “cue,” which includes a variety of smoked and grilled plates and sandwiches.

Popular on weekends is Garden District’s own brined-and-smoked chicken wings. There’s a broad selection of German Hofbrau beers and regional craft brews — served on draft, canned, bottled, and in 32- and 64-ounce growlers.

With roots going back to the early 20th century, Bohemian Hall has been keeping the Czech and Slovak beer garden tradition alive in the immigrant-rich borough of Queens for many generations. It’s the largest biergarten in New York City and it serves up traditional Czech favorites like goulash and fried cheese (smazak) along with a couple of dozen German, American and classic Czech beers like Krusovice and Staropramen on draft.