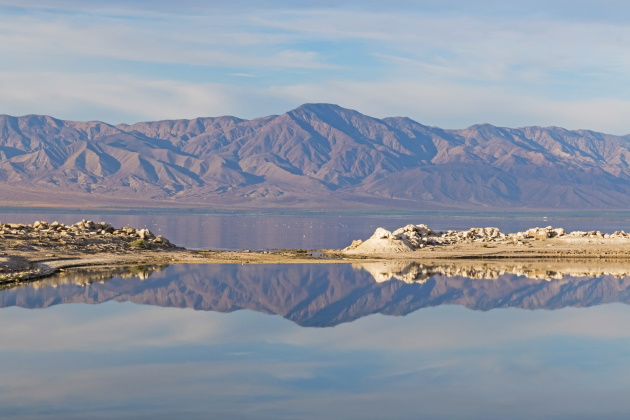 According to a 2019 report from the U.S. Travel Association, nearly half of all vacationers visit an art museum or gallery during their travels. While one would expect to find art on prominent display in large cities such as New York and San Francisco or in artsy hot spots like Santa Fe or Sedona, there are a number of small, offbeat and under-the-radar towns where you’ll find some of America’s most avant-garde and inspirational art.

As writer Jay Gentile from Thrillist put it, “Art thrives on the fringes and blossoms wherever the hell it wants.” So, if you’re ready for some oddball ingenuity and cosmic craziness, let’s check out this select list of America’s funkiest art towns.

In spite of the apocalyptic appearance of much of its sparsely settled shoreline, Salton Sea can boast a glamorous history. It’s a boom-and-bust story, the latest chapter of which finds the scrappy desert community located 60 miles south of Palm Springs emerging as an internationally renowned stage for large-scale outdoor art.

Salton Sea was formed in 1905 when a massive flood of the Colorado River swamped the Imperial Valley, which sits more than 200 feet below sea level. The emergence of the lake brought resorts, expensive homes, bars and restaurants and even Beach Boys concerts. The area became known as the “Salton Riviera” and throughout the 1950s it netted more annual visitors than Yosemite.

By the 1970s, however, the lake — accidentally formed with no overflow or outlet — began drying up and the water became saltier than sea water, killing all the fish and driving away most wildlife and vacationers alike.

While there’s no hope of restoring the lake, a few hundred souls, many of them artists, occupy Salton’s parched shores — which they’ve turned into a larger than life art gallery.

While not nearly as high-tech as Nevada’s annual Burning Man festival, the theme is similar. It’s a weird desert aesthetic that features a number of captivating installations including “The Bombay Beach Drive-In,” consisting of rusted cars facing a blank screen, “Lodestar,” a crashed plane that resembles a carnival ride, and “The Open House,” a large door that leads nowhere. Down on the beach, among the fish bones, there’s a swingset out in the water. This is “The Water Ain’t That Bad, It’s Just Salty.” Dry mouth? Slip into the no-frills Ski Inn, lowest bar in the Western Hemisphere, for a cold beer. 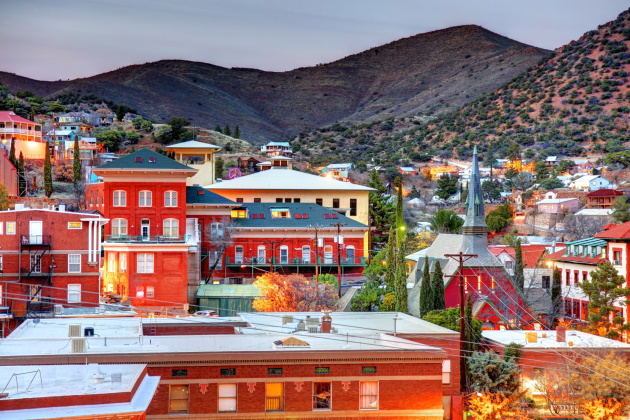 Sedona usually gets the nod as Arizona’s art capital, but it’s way too slick and snooty for us. We like to head down south to the wee burg of Bisbee — just 11 miles from the Mexican border. The vibes are absolutely cosmic in this hippy hamlet, once a major copper mining center, that’s been attracting artists and counterculture types since the 1960s.

The free-spirit mentality is unmistakable as one strolls through Bisbee’s historic Victorian downtown to discover curious nuggets and colorful splashes of psychedelic art, galleries buzzing with artists at work, trippy “art cars” and creative junk collections displayed as “lawn art.” Cap off an art tour with a craft beer and tasty bar food at Old Bisbee Brewing Company.

New Mexico is a very artsy place. Much of the creative inspiration can be ascribed to the vivid landscapes here in the Land of Enchantment. Contributing too is a multicultural mix of Hispanic, Native American and “gringo” heritage, each with its own traditional styles of artistic expression.

While Santa Fe and Taos have become legendary outposts of the art world, a case could be made that just about any town in New Mexico could qualify as an art town. But the state’s most up-and-coming art scene can be found in tiny Madrid (pop. 240), located on the Turquoise Trail (Hwy 14) between Santa Fe and Albuquerque.

Nearly abandoned following a 19th century mining boom, Madrid began gentrifying as an art village in the 1970s and today it hosts more than 40 businesses — art galleries for the most part, mixed with curio shops, bars and cafes.

Any stroll of gallery row should include a stop at Roadrunner Studio & Gallery to view paintings sculptures and photography. Starshine Gallery features jewelry, upcycled clothing and spiritual healing. The owner is a spirit medium and Reiki master. And the Tapestry Gallery, a weaving studio representing local handweavers and fiber artists is worth a visit. At some point, most visitors find their way to the Mine Shaft Tavern for local microbrews and one of New Mexico’s famous green chile cheeseburgers. 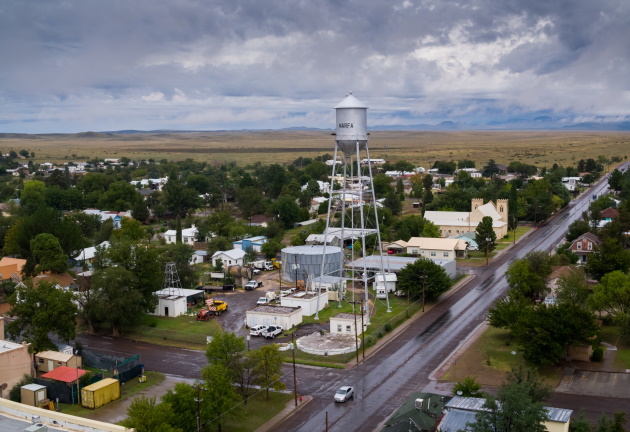 This speck of a town perched on the high plains of the Chihuahua Desert in West Texas is a most unlikely location for what has become one of the must-see attractions for the art world. Founded in the 1880s as a railroad water stop, Marfa never really came to life until the Army built an airfield there to train its pilots during World War II. Many residents left when the base closed and most who remained took up ranching.

Things changed in 1971 when the well-established minimalist artist Donald Judd moved to Marfa from New York City. He bought up and restored abandoned buildings — airplane hangars and massive brick artillery sheds — at the base and filled them with his large-scale works, including his signature milled aluminum boxes and some notable neon light installations by Dan Flavin. A stroll through a scrubby pasture leads to a scattering of large concrete boxes — 15 of them — as resolute and remote as the landscape.

In 1976, Judd bought 400 acres of nearby ranchland where he built his home along with more permanent art spaces. Since his death in 1994, two foundations have worked to maintain his legacy and his 400-acre property: the Chianti Foundation and the Judd Foundation. The Chianti Foundation occupies more than 30 buildings in Marfa and has permanent displays of the work of 13 artists.

In recent years, a new wave of artists has moved to Marfa to live and work. As a result, a slew of new gallery spaces has opened in the downtown area — along with new shops, bars and restaurants. Hard to miss is Marfa’s favorite food truck — the omnipresent and world-famous Food Shark — serving up “Mediterranean-by-way-of-West-Texas” grub. Popular too is the Lost Horse Saloon, a genuine cowboy bar offering pool, cold beer and A/C.

Tucked away in the Ozark Mountains of Arkansas, Eureka Springs attracts plenty of visitors with its hot springs, wide-ranging entertainment venues, shopping and dozens of art galleries and studios. In this town of 2,000, more than 300 are working artists.

The town is a work of art in itself, thanks to its gorgeous Victorian architecture and winding up-and-down streets and lanes. The entire city limits of about two square miles have been designated a National Historic District.

The best of Eureka Springs’ Victorian architecture can be seen on Bathhouse Row where the landmark 1886 Crescent Hotel, the Palace Bath House and Basin Park Hotel are built around the town’s natural hot springs.

Chelsea’s Corner Café — a classy dive bar with live music and tasty pizza — is a popular hangout for locals and visitors alike.

Visitors to Hamilton Township, tucked away between Trenton and Princeton, are greeted by sculptures. They are scattered here and there. But they’re just a taste of what’s in store for anyone venturing onto the Grounds for Sculpture. Formerly the local fairgrounds, this 42-acre sculpture park houses more than 270 sculptures in a leafy garden-like setting — complete with roaming peacocks.

The park features work ranging from wildly abstract to ultra-realistic — the latter style embodied in an extensive collection of bronzes by the park’s founder John Seward Johnson II, grandson of Robert Wood Johnson, co-founder of Johnson & Johnson. He is famous around the world for his life-size and very much lifelike tromp-l’oeil painted bronze statues of human characters. A whimsical example of his work in Hamilton reveals a group of bronze figures casually dining beside a psychedelically adorned pond.

Van Gogh Café at the Grounds offers French-inspired baked goods, coffee and other drinks. Rat’s Restaurant, named for the famed “The Wind in the Willows” character, serves country French cuisine for lunch and dinner — or you can picnic in the park with takeout from Rat’s.