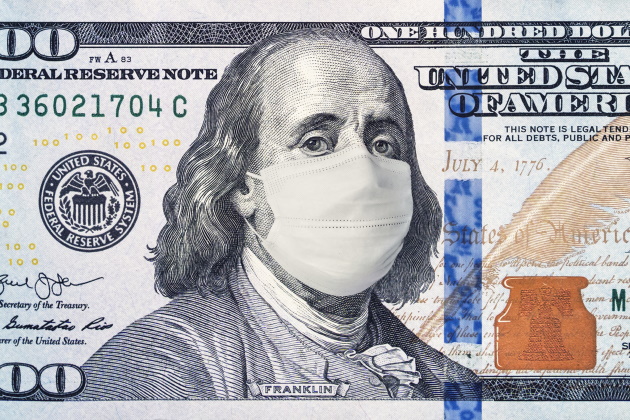 Surviving the coronavirus is currently topof mind for the American public. There are many likely scenarios possible within the possible epidemiological trajectories of COVID-19 and the economic response to this crisis will also develop over the next few months, bringing a new set of struggles to consider.

The Conference Board, a New York-based think tank on the economy and public policy, has developed three scenarios for the development of the U.S. economy through the remainder of the year.

The first scenario (a May reboot or "quick recovery"), assumes a peak in new COVID-19 cases by mid-April, with economic activity gradually resuming in May. In the second scenario (a summertime V-shape, or "deeper contraction, bigger recovery"), the peak in new cases will be higher and delayed until May, creating a larger economic contraction in Q2, but also a stronger recovery in Q3. In the third scenario (a fall recovery or "extended contraction"), a managed control of the outbreak helps to flatten the curve of new COVID-19 cases, and stretches the economic impact across Q2 and Q3, with growth resuming in September.

"The impact on the economy is different across the three scenarios," says Bart van Ark, chief economist of The Conference Board. "In our most optimistic scenario, the economy will shrink to 1.6% in 2020 compared to 2019. However, the contraction will be much stronger under the summertime V-shape (5.5%) and the fall recovery (6%) scenarios. Businesses should prepare for those worst-case scenarios, given their high probability of occurring."

The impact of the crisis will differ substantially between sectors and industries, according to the analysis. "The largest effects are seen in industries that are mostly hurt by social distancing and other containment measures, including entertainment, restaurants, and large parts of the transportation sector," says Erik Lundh, senior economist at The Conference Board. "However, the longer the contractions last, the more industries will be impacted through revenue losses and cost containment measures."

Regardless of which scenario will ultimately play out, the impact on the unemployment rate will be quite significant — something that we are seeing right now. In the first scenario, the unemployment rate will rise to 8% by Q3 and then gradually drop off during the second half of the year. In the other two scenarios, unemployment may increase to more than 15% by Q3, and — especially in the case of the fall recovery scenario — remain at 10% or more until Q4.

The worst effects on the economycan be mitigated by at least four policy factors:

1. A strong and coordinated management of the health crisis itself
2. The use of policy tools to reduce layoffs
3. Fiscal policy tools that can reach lower-income consumers and small businesses fast
4. A cautious but clearly guided reboot of the economy, with a focus on the quick unlocking of supply chains

The scenarios take into account the effects of government stimulus coming through, although the precise effects of the $2 trillion stimulus bill on different sectors and expenditure categories have not yet been fully assessed.

To build these scenarios, The Conference Board used an industry-based approach, making assumptions on the percentage contraction by major sector and by month. The assumptions will be made available in an interactive format on TCB's website so that users can alter the assumptions and make their own projections.

Scenario 1: A May 2020 Reboot and Quick Recovery

The May reboot scenario assumes that the number of daily added new COVID-19 cases will stop accelerating by mid-April. While the number of sick people may continue to increase into May or June, it might then be possible to allow a controlled reboot of the economy by the month of May. Warmer weather might help, and there will hopefully be enough time to find better medications and treatments (although development of a widely-used vaccine may take longer) to avoid a return of the pandemic next fall or winter.

The largest contractions in this quick recovery scenario are in sectors most directly impacted by social distancing and other containment measures. Arts, entertainment, recreation and accommodations show the biggest decline at 30% per month in March and April. This is followed by transportation and warehousing at 15%, and retail trade at between 7.5 and 15% cumulatively for two months. Other sectors, such as manufacturing and finance, also don't go unscathed but monthly declines are smaller at 5-7.5%.

In this quick recovery scenario, the most impacted sectors may slowly resume operations by May. Other sectors in the economy may only be moderately damaged by what will essentially be a six-week economic crisis. Small growth upsides can be expected for utilities, information services, professional and scientific services, waste management, and government, but those will fall far short of making up the short-term losses in other sectors.

Using an annualized rate, the economy will contract by 16.5% in the second quarter, which equals a decline in the level of GDP of about 4.5% compared to the first quarter. As a recovery emerges in the third and fourth quarter, the annual loss in GDP in 2020 will end at 1.6% compared to 2019.

As the most impacted sectors are strongly dependent on discretionary consumer spending, this category will be most impacted by the crisis. On an annualized basis, it will contract by 22.8% in Q2, but recover by 6.4% on average during the second half of the year, which is insufficient to offset the 11.5% decline during the first half of the year. For all of 2020, the decline would be 2.5% (over 2019). In addition, we assume strong declines in investment and exports, and a decline in inventories, until the second half of the year. Unemployment will rise to 8% by the third quarter, but gradually level off after that.

The summertime V-shape scenario assumes that the peak of new COVID-19 cases will be higher than in the May Reboot scenario — and will take more time to fall to acceptable levels — so that no restart of the economy will be possible before June or even July.

As new cases continue to escalate beyond mid-April, social distancing and other containment measures are likely to remain in place for longer. This will again most severely impact, for example, arts, entertainment, recreation and accommodations, which will contract 50% in March, 30% in April and 20% in May. Transportation and warehousing will contract at 25% in March and by slightly smaller percentages into April and May. The good news is that these sectors may come back to life by July and could see fairly strong rebounds during the summer.

In addition to those sectors hardest hit (listed above), the ongoing decline in consumer spending will affect other sectors such as retail trade, wholesale trade, and manufacturing, which may see declines of between 5 and 15% per month from March to May, then a modest recovery as of June.

Overall, the economy will contract deeply by 35.6%, annualized, during the second quarter, which equals a drop in the level of GDP of more than 10%. The upside to the deeper contraction is that once people can resume regular activities, a sharper recovery emerges over the summer. However, by year end, the economy will still end up below where it started, and GDP growth will show a decline of 5.5% in 2020 compared to 2019.

Unemployment will go up much faster in this scenario and could hit 15% by Q3, after which it may level off to 10% towards the end of the year.

The third scenario, a fall recovery, assumes a more effective and managed control of new COVID-19 cases and flattening of the curve. While this reduces the pressure on the healthcare system and the potential number of fatalities in the coming months, it also means that the reboot of the economy will not begin until September, in particular because social distancing and other containment measures — while being relaxed somewhat — may still remain in place for several more months.

Because the period of contraction of GDP lasts longer in this scenario, more economic sectors will suffer. In addition to the sectors identified above, weakness will extend to finance and insurance, and professional business services, among others. We also anticipate that budget cuts and cost-cutting will force more companies to reduce their workforce and raise unemployment to 15% — a level which might be extended through the end of the year.

In this scenario, we expect contraction in the second quarter to be about 30% (slightly less than in the V-shaped scenario), but to continue into Q3 at a much shallower rate. While Q4 will see a rebound, the economy in all of 2020 over 2019 will contract at 6%. This would be the largest decline since 1946, when the economy dropped by almost 12% as a result from the demobilization from WWII and the sharp pullback in military production (in 2009 the economy contracted by just over 3% compared to 2008).

Again, consumer spending will see the largest declines in this scenario, decreasing by 38% on an annualized basis in the 2nd quarter, and will only recover by 18.5% in the fourth quarter.

Investment and exports will also see large contractions during the second and third quarters. Government spending as a result of fiscal stimuli will accelerate but will not be sufficient to offset the declines in the private sector of the economy.

One factor fall recovery scenario is that it assumes COVID-19 will not return in full force during the fall. To avoid a resurgence, a combination of more preventive measures, possible medication to treat the virus, and the emergence of immunity to the virus among a large part of the population will be required. We currently have not included a scenario that sees a large pickup in COVID-19 cases during the fall.

"Whatever the degree of the decline and the shape of the recovery, in all scenarios developed so far, the level of economic activity by the end of the 2020 will be lower than at the end of 2019, by between 1.6 and 6%," adds Lundh. "These kinds of contractions, on both a quarterly or annual basis, have not been seen since the aftermath of WWII."

With various sectors, especially in services, which may come to a standstill from now to possibly May, the forced contraction in consumer spending is very large. Many foregone services, such as travel and recreation, will create a permanent loss, meaning they will not be made up for through pent-up demand later in the year.

This will temper the rebound. In other sectors, such as manufacturing and logistics, pent-up demand is more likely and the gap in economic activity levels may strongly narrow by the end of the year. However, the disruptions in supply chains can make a quick rebound more difficult because all links in the chain need to work again.

As to the policy response for surviving COVID-19 and rebooting the economy, a strong and coordinated management of the health crisis itself will determine whether the economy can be gradually reopened for business relatively soon, or whether stringent containment measures need to remain in place for longer.