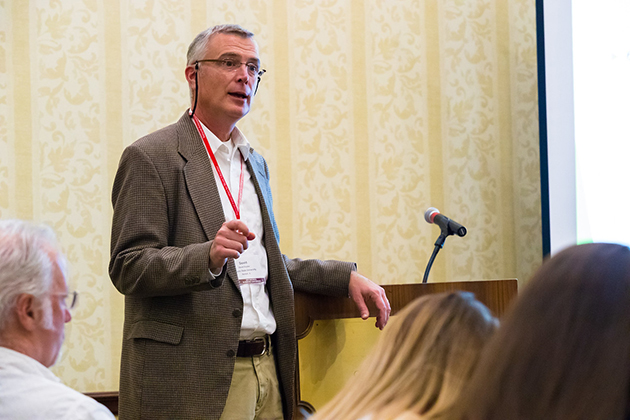 GRAPEVINE, Texas — Are you frustrated by subpar performance from your ensemble? Do you see the same problems reoccurring over time?

Many band directors do, and they may mistakenly blame their students for some of the issues.

David Snyder, a professor at Illinois State University who has spent 33 years conducting and observing bands, identified 10 of the most common mistakes band directors make. He shared the problems and some solutions during a Nov. 13 session at the National Association for Music Education (NAfME) National In-Service Conference.

1. Wasting time with logistics and talking

There is often a chaotic beginning to a rehearsal that could go into making music. Ensure chairs and stands are set up and that music and worksheets are passed out before rehearsal begins. Band directors also have a reputation for talking during rehearsal. The average talking-to-student-playing ratio is 70/30. But no one joined band to hear you talk; they joined band to play. Limit your instructions by keeping them concise and clear.

2. Not planning for the next rehearsal based on the previous one

A regular routine of listening to rehearsal recordings and score analysis must be established. Mark problem spots in the score with Post-it notes or using an app like For Score for iPad. Don't assume because the spot in question was fixed today that it will remain that way next time.

3. Getting drawn into tangents and not sticking to the original lesson plan

Monitor your time and know when it's time to move on. Sketch out rehearsal time breakdowns for the whole week or even the entire concert cycle. And prioritize what is going to be worked on (going from bigger to smaller).

4. Spending too much time in "full band"

5. Not utilizing a rehearsal routine that allows for fundamentals and tuning

The students in your ensemble don't determine the sound of your band. You do. This happens when you are focused on basic tone production, sound production and pitch. Every rehearsal should have a brief time for warmup and training the students to listen for pitch.

6. Not giving specific feedback to players from the podium

If you are going to play a spot again, tell the students why. Be specific to who the problem is (which instrument or group) and what the problem is (rushing dragging, too long short, too loud/soft, attacks/releases, pitch). Experienced teachers tend to be much more specific in their feedback.

7. Being unable to hear the "true" problem that is occurring

It is essential to record rehearsals and then listen to the recording with score in hand. Train your ears to listen for the less prominent parts. Almost all "sloppy" playing is due to articulations or note length not matching.

When in doubt, isolate the less prominent sections to hear what is really going on. When possible, allow your percussion to work separately with an expert or skilled student on their parts. You can also use your percussionists to give feedback on tuning and balance during rehearsal. This will make them more sensitive musicians and keep them on task.

9. Tuning pitches rather than players

10. Not asking for objective feedback from others

Ask other music colleagues in the school to come and listen to your rehearsal, or ask a respected director from another school to visit a rehearsal or listen to a recording. But be ready to hear and accept what they have to say, and then try to apply it to your group.

Whether all of this advice applies to your band or you only resonate with one or two tips, Snyder hopes band directors can immediately apply at least a couple of ideas with the end goal of improving the overall sound and performance level of their group.