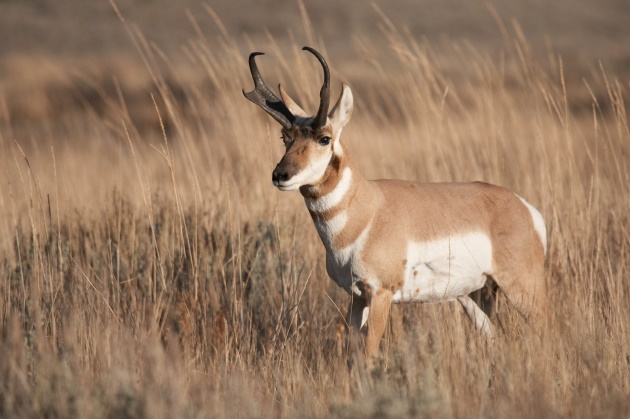 If you’ve never hunted pronghorn before, they’re a really fun animal to pursue. Those hunts certainly provide a very different experience from hunting whitetail deer out of a tree stand.

Pronghorn have incredible eyesight and can cover ground faster than any other North American mammal. These reasons, along with the fact that they usually live in relatively open country, mean that finding pronghorn is usually much easier than getting close enough to take a shot at one, though.

However, extreme long-range shooting is not required to hunt pronghorn and it’s still possible to get within shooting range of even the wiliest pronghorn buck if you keep a few things in mind. I just returned from a successful pronghorn hunt on public land up in Colorado. Here are a few important lessons learned from that trip.

First, don’t be afraid to get down on your belly and crawl. In fact, you might even call crawling an essential part of spot and stalk pronghorn hunting. Even though pronghorn often live in open terrain, there’s usually a little vegetation, a shallow depression, or a low ridge nearby that can screen your movements if you crawl.

Additionally, while pronghorn will quickly associate the silhouette of a standing human with danger during hunting season, they often aren’t as fast to react with suspicion or fear to the sight of a crawling human. Indeed, pronghorn are also curious animals and will sometimes even come in closer to investigate an unknown object and thus help close the distance for you.

Pronghorn country is often filled with cactus and other thorny plants though, so I recommend wearing some leather gloves and knee pads to protect yourself from those hazards while you’re crawling.

Next, be aggressive when you get a good opportunity to close the distance with a pronghorn. If the animal is focused on something else or if there’s something blocking your movements from its view (like a hill), close the distance as quickly as possible, even by running if necessary. That brings me to my next point though: don’t push a bad situation or try to move forward if the animal is looking directly at you. If that happens, hold in place and stay perfectly still until the pronghorn loses interest.

This might take a long time and I’ve had pronghorn stare me down for upwards of 20 minutes on several occasions before they finally lost interest and I could start moving forward again.

Sometimes they don’t lose interest though and spooking pronghorn is just a part of the game. Following up a spooked buck does pay off sometimes, but it’s not always wise, though.

The good news is that pronghorn are pretty territorial. As long as you don’t spook a buck too badly, there’s a good chance he’ll find his way back to his home turf and you could very well find that same buck close to the same spot again later in the hunt. So, seriously consider giving a spooked pronghorn some space while he calms down and heads back to his territory before you take another crack at a stalk.

By the same token, if you spot a group of pronghorn in a particular area late in the day, consider just watching them from afar until the sun goes down. If you do that, the odds are very good they’ll be right there the next morning after the sun rises.

Above all things though, remain persistent and have fun while you’re afield. Things won’t always go as planned and pronghorn can be a notoriously frustrating animal to hunt. However, the odds are still in your favor if you keep plugging away, and it’s an incredibly satisfying feeling when everything comes together on a pronghorn hunt.