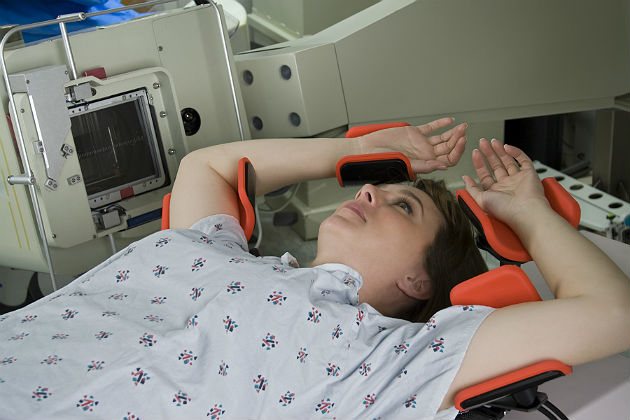 This article is the second of a three-part series on breast cancer: diagnosis | treatment | surgery

The American Cancer Society predicts that 232,670 new cases of breast cancer will be diagnosed in U.S. women in 2014, resulting in about 40,000 deaths. But the percentage of women who die from breast cancer has steadily declined since 1989. This is often attributed to screening and early diagnosis, but improvements in treatment have also helped.

The established treatments for breast cancer are radiation and drug therapy, either as a single line of treatment or often in combination. New drugs — still in preliminary stages and early clinical trials — could add to the chemotherapy options available for breast cancer treatment.

One of these new drugs is a compound based on the precious metal iridium. The drug, ZL105, may be able to replace some standard anticancer drugs that often become less effective or more toxic, causing much more damage to healthy cells. According to data obtained by the U.S. National Cancer Institute, the novel drug may be 10 times more effective in treating some breast cancers.

Another new type of drug, palbociclib, has shown some promising results in a Phase II clinical trial. Researchers say this new drug could help prevent advanced breast cancer from worsening and cut in half the risk that the cancer would progress. The drug, a cyclin-dependent kinase (CDK) inhibitor, slows cancer cell growth by inhibiting two enzymes involved in cell division: CDK 4 and 6.

In another trial known as I-Spy 2, newly-diagnosed patients who have HER2-positive/HR-negative high-risk breast cancer were studied. Researchers learned that the experimental drug neratinib, added to standard chemotherapy was highly effective in treating these patients.

Because of the nature of this adaptive trial, many drugs can be tested from different companies, and drugs can be continued, added to or dropped from the trial without FDA approval. So far, seven drugs have been tested, and more are being prepared to enter the trial.

According to Dr. Cedric Garland of the UCSD School of Medicine, "There is no compelling reason to wait for further studies to incorporate vitamin D supplements into standard care regimens since a safe dose ... has already been established."

In the other "half" of breast cancer treatment, breakthroughs in radiation-related therapy are also showing promise. Minimally invasive treatment methods using magnetic resonance-guided ultrasound are able to heat and destroy breast cancer tumors.

A study at Sapienza University in Rome found that this procedure allowed for safe tumor removal. In 10 of the 12 patients who participated in this procedure, histological evaluation confirmed the absence of residual disease in the treatment area.

Another minimally invasive procedure that shows promise in treating breast cancer is called yttrium-90 (Y-90) radioembolization. Y-90 is primarily being used for breast cancer that has metastasized to the liver, when no other treatment options remain.

Although this is not a cure, this outpatient treatment was found to be safe and managed to stabilize the disease in 98.5 percent of the women's treated liver metastases. The hope is that Y-90 radioembolization can shrink tumors, ease pain and potentially improve survival rates in these patients.